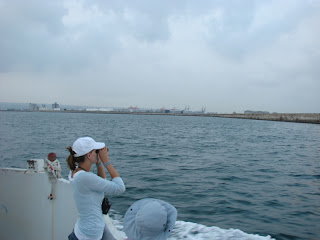 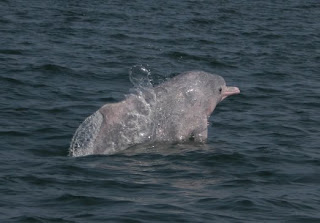 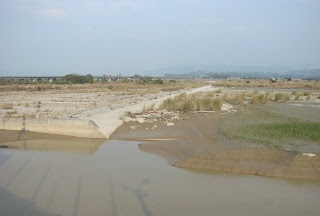 
The problem of river dust has been an ongoing problem in Taiwan. The floodplains of the Jhoushui and Chingshui Rivers in western Taiwan have been particularly bad. Taiwan's rivers are by nature short with a very steep gradient. The westerly-flowing rivers, with their source in the central mountains, with many peaks higher than 3000m, descend rapidly onto the western coastal plain. During typhoons these rivers carry great volumes of water and thus are characterised by a very wide lowland floodplain. This, to a point, naturally creates river dust during the November to December and February to March dry seasons.

In more recent times, with the damming of rivers higher up, the volume of water in rivers on the coastal plains has decreased considerably. This has drastically increased the river dust problem in West Taiwan. With industry demanding more water the problem has increased. To meet the demands of industry the authorities turned to pumping groundwater. This has further aggravated the river dust problem. While the EPA reports some progress in the battle against river dust, we can only expect the problem to increase when water from the Chingshui River is diverted to the Hushan Dam further reducing the volume of water in the lower reaches of the Jhoushui and Chingshui Rivers.

Not only does the reduced volume of fresh water flowing into coastal estuaries create a dust problem, it also has a very negative impact on the coastal ecosystems that depend on it resulting in the degradation of coastal habitat. Probably the most prominent victim of degraded coastal habitat is the unique Taiwan population of humpback dolphins where numbers have declined to around seventy individuals and will certainly become extinct unless drastic measures for their protection are taken now. The EPA needs to seriously consider the implications of the total degradation of the west coast and what that would mean. Is it really within our best interests to sacrifice the west coast for the short term gains of increasing pollution-generating, high water-volume-consuming heavy industry in the area?


EPA reports progress in battle against river dust
Posted by Wild at Heart Legal Defense Association at 3:17 PM No comments:

Expansion plans for the Sixth Naphtha Cracker in Mailiao Township, Yunlin County underwent a fourth review by the Environmental Protection Administration's (EPA) Environmental Impact Assessment (EIA) Committee yesterday. The EIA Committee requested additional information from the Formosa Plastics Group before it could rule on expansion plans for an Yunlin County plant. The expansion of the Sixth Naphtha Cracker poses a threat to the extremely vulnerable unique population humpback dolphins that inhabit the West-Central Taiwan coast. The controversial Hushan Dam is being constructed at great expense to Taiwan's natural environment to supply water for the development of heavy pollution-generating industry on the west coast.


See today's Taipei Times for the story.
Posted by Wild at Heart Legal Defense Association at 1:09 PM No comments:

Two great film clips of Taiwan pink dolphins right in front of Formosa Plastics have been posted on MFCU member Wild at Heart Legal Defense Association's website. Clearly visible in the background is Formosa Plastics Mailiao Industrial Park in Yunlin County - where proponents of further development have denied the presence of these dolphins. Thanks to the work of MFCU member FormosaCetus, we are able to disprove such claims and give this population a better hope of survival.

Two short film clips of some pink dolphins shot by the MFCU on Saturday 6 July at Taichung Port.


Also see:
Video Footage of Taiwan's Humpback Dolphins - Right In Front Of Formosa Plastics!
Posted by Wild at Heart Legal Defense Association at 11:21 AM No comments: