What's in store for environmentalists in Taiwan's new Police State ? 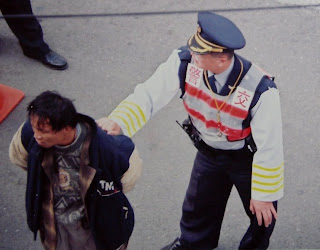 A Taiwan police officer with his suspect following a DPP rally in Yunlin County. 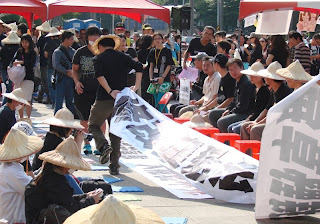 Recent events in Taiwan have shown that newly-elected President Ma Ying-jeou's Government has little respect for or understanding of freedom of speech, democracy, the right to protest, and human rights. Police have brutally attacked reporters and democracy protesters, and taken opposition leaders into custody without charging them. As Ma's regime tightens the screws on freedom of speech and suppresses democracy protests what kind of treatment can environmental activists expect when they voice their concerns to the Ma-led government ?

The visit by a sixty-strong Chinese delegation headed by Association for Relations Across the Taiwan Strait (ARATS) Chairman Chen Yun-lin earlier this month saw much of Taipei turning into a literal mini police state. It would appear that the Chinese Nationalist Party (KMT) Government was prepared to wind the clock back to the days of Martial Law* in a bid to impress their Chinese guests.

Police officers behaved in a manner reminiscent of the Martial Law era. Apart from behaving like baton-wielding-thugs they even rounded up people for waving the national flag. The Paris-based International Federation for Human Rights has expressed concern over what it calls "grave violations of human rights" committed by police during the protests.

With over a thousand Chinese missiles pointed at Taiwan and the constant threat of a Chinese invasion of Taiwan coupled with the way China constantly humiliates Taiwan in the international arena it is understandable that many Taiwanese have a distrust of the Chinese and are opposed to visits by Chinese officials to Taiwan while China continues to sabre-rattle and denies Taiwan's very existence as a nation.

In late October, ARATS Vice Chairman Zhang Ming-qing had said during a visit to Taiwan, "There will never be war in the Strait if there is no Taiwan independence." This was seen as a threat and it angered many in Taiwan and sparked a confrontation between pro Taiwan supporters and Zhang.

On Sunday, the Taiwan Wild Strawberries Movement held a memorial service for human rights. The Taiwan Wild Strawberries Movement** is a student movement that sprang up in response to police brutality during the November protests against ARATS Chairman Chen Yunlin's visit to Taiwan. The students have been staging a sit-in since November 6th. Police removed the students from outside the Executive Yuan in Taipei on November 7th. The students reformed their protest outside the Taiwan Democracy Memorial Hall and are still there. Students are holding similar protests in other Taiwan cities.

Their protest statement is, firstly, that President Ma Ying-jeou and Premier Liu Chao-shiuan must publicly apologize to all citizens for what has happened. Secondly, the National Police Agency Director-General Wang Cho-chiun and National Security Bureau Director Tsai Chao-ming must step down. And thirdly, the Legislative Yuan must revise the Parade and Assembly Law, which currently restricts the rights of the people.

While all this has been going on the Ma-led Government has staged a massive crackdown on opposition Democratic Progressive Party (DPP) politicians and several have been detained.

The previous KMT regime (1945-2000) had little respect for Taiwan's environment and had an extremely poor record for environmental protection. The Environmental Protection Administration (EPA) was largely seen as merely a rubber stamp administration. To a point this continued during the DPP government's two terms (2000-2008), two examples being the controversial appointment of the seventh Environmental Impact Assessment (EIA) Committee of the EPA and the handling of the assault of former EPA EIA Committee commissioner and Wild at Heart Legal Defense Association director, Robin Winkler, at a meeting at the EPA offices. Against the backdrop of recent events it would seem likely that environmental activists can expect to face the same iron wrath of the government the moment they take to the streets to voice their concerns for the environment.


* Following the end of World War II in September 1945 the Japanese colony of Taiwan was occupied by Chinese Nationalists Forces of Chiang Kai-shek [Taiwan had become a Japanese colony in 1895. Taiwan had been ceded to Japan by the Treaty of Shimonoseki following the Sino-Japanese War of 1894-1895. The Qing Government of China had exercised some control over parts Taiwan since 1683 but had never controlled the whole island. Following the Treaty of Shimonoseki Taiwan declared independence as the Republic of Taiwan. The short-lived Republic of Taiwan was defeated within a few months following the landing of the Japanese Army on 29 May 1895.]. The poor conduct of KMT forces and officials on Taiwan led to tensions between the Chinese and the Taiwanese. On 28 February 1947 things came to a head at the infamous 228 Incident. The Chinese Nationalist Party (KMT) used this as an excuse to rid Taiwan of its own leadership and intelligentsia by systematically murdering them in a brutal crackdown. The KMT then declared Martial Law in 1949. In 1949 the KMT were defeated by Mao's Chinese Communist Party (CCP) in the Chinese Civil War and the KMT fled to Taiwan where they set up their Republic of China regime on Taiwan. The Martial Law period lasted until 1987. This was known as the White Terror. During the White Terror anyone thought to be challenging the regime was rounded up and imprisoned. Many were tortured and executed by the brutal KMT police state.

** The post martial law generation in Taiwan is known as the strawberry generation. Strawberries being soft and fragile. In 1990 the Wild Lily Student Movement sought direct elections of Taiwan's president and vice president and representatives, and it played a part in the bringing about of Taiwan's first ever democratic elections. The origins of the name Wild Strawberries Movement incorporates these elements.

Some photos of the Wild Strawberries Movement protest in Taipei: 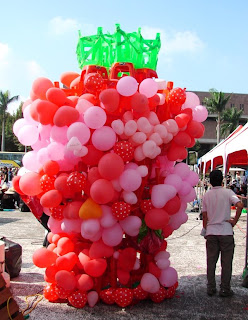 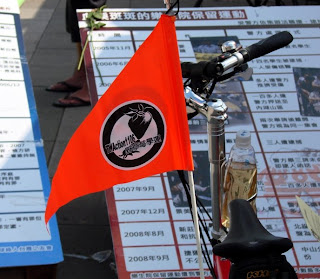 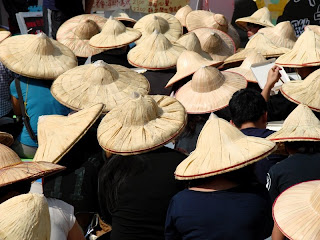 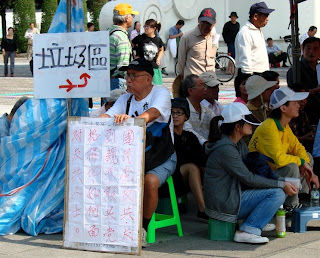 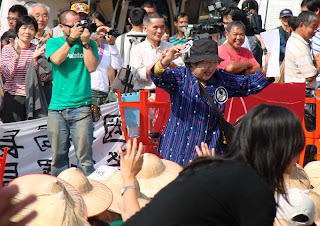 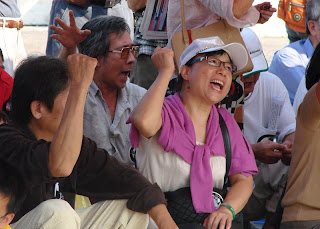 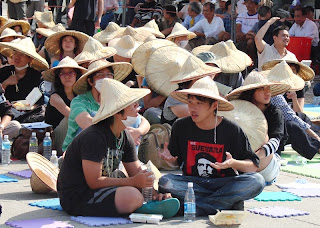 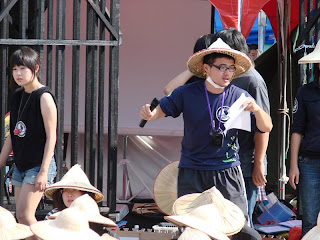 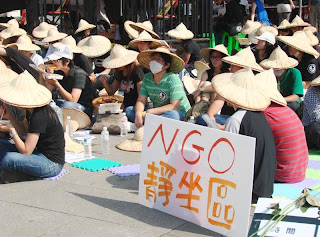 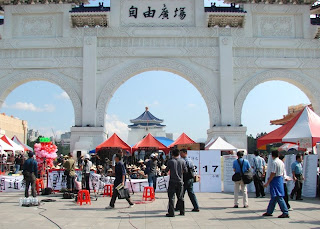 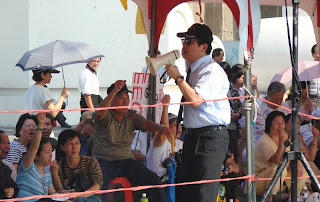 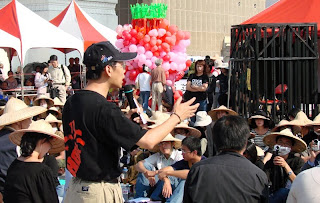 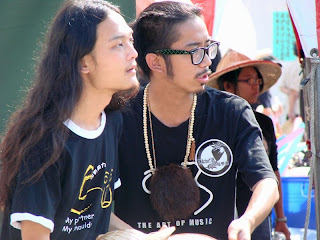 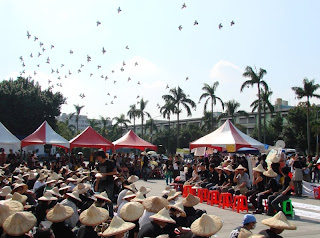 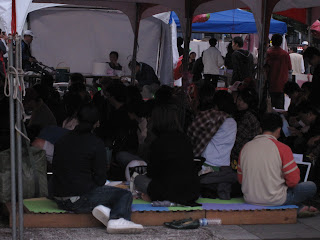 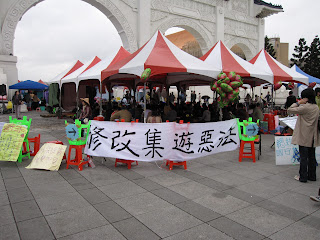 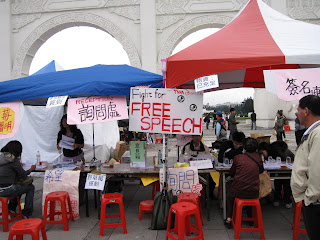 Posted by Wild at Heart Legal Defense Association at 1:13 AM No comments: 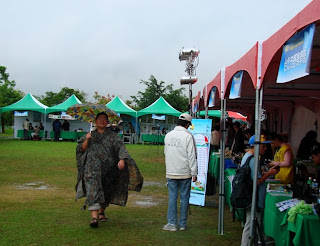 
The 2008 Taipei Birdfair hosted by the Wild Bird Society of Taipei was held in Guandu Nature Park over the weekend of November 8-9. Unfortunately it rained through much of the weekend which resulted in a far lower number of visitors than usual. Both local and international birding societies, groups and NGOs were present. The Wild Bird Society of Yunlin provided information on the Hushan Dam-Fairy Pitta issue and the plight of the unique population of Taiwan humpback dolphins. 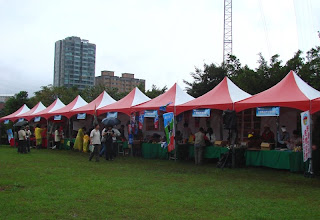 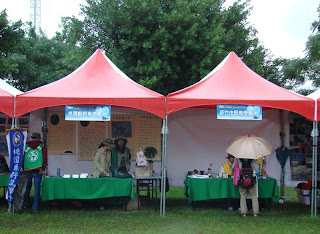 Posted by Wild at Heart Legal Defense Association at 2:24 PM No comments:

The following story appeared on a Yahoo News page [in Chinese] here in Taiwan:

Fishers have reported seeing Pink Dolphins in the Baishatun area off the coast of Tongsiao Village. The sightings by the fishers have been welcomed by people in neighboring villages who believe the dolphins could bring tourism and associated development.

The happy fishers, who face the strenuous work on the seas, were not tired at all after having seen the rare dolphins.

One fisher laughed as he said they used to not like dolphins because of the damage caused by the animals to their nets and that they would chase the fish away. But seeing a pod of the animals along the west coast was really a rare moment and a very lucky one at that.

This particular fisher had placed nets about one nautical mile [1.852 km] from the shore and in addition to seeing the dolphins his catch of fish was a good one leading the fishers to agree with those who say the dolphins are harbingers of good fortune. 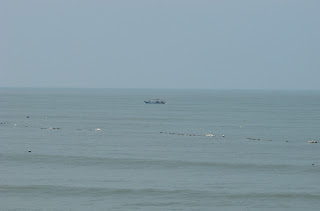 Fishing within a kilometre of the shore at Mailiao. Nets are a major threat to the dolphins. 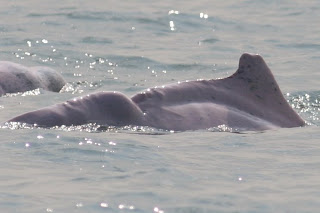 
Fishing is amongst the five major threats that these dolphins face. With a total population of around seventy-five individuals the loss of a single dolphin per year, particularly females of breeding age, through by-catch would be catastrophic for the population and would more than likely seal their functional extinction. If we are to save these unique animals from extinction fishing within 4km of the shore within the dolphins little remaining habitat between Miaoli and the Yunlin-Chiayi border will have to be disallowed. Scars and actual sightings of ropes on animals are a strong indication that fishing practices are impacting very negatively on the dolphin population. 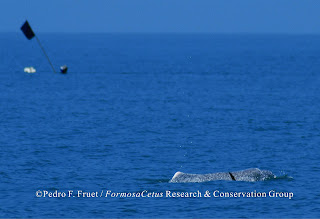 Pink Dolphin with a rope around it. The red and black flags or "high flyers" as they are called, mark the ends of a gillnet. The rope looks as if it is likely the leadline of a gillnet: Photo courtesy and copyright FormosaCetus Research & Conservation Group


Additional threats include so-called development. Reclamation work, particularly around Mailiao and Taisi on the Yunlin coast is destroying habitat at an alarming rate. Other planned projects further up the coast will have a similar impact. The degrading of estuarine habitat through the damming of rivers which reduces the flow of freshwater into valuable wetland and coastal habitat has had an impact. The Hushan Dam Project will undoubtedly have a very negative impact on the already struggling Jhoushui River Estuary once construction of this highly controversial dam is completed. In addition, the development of both onshore and offshore 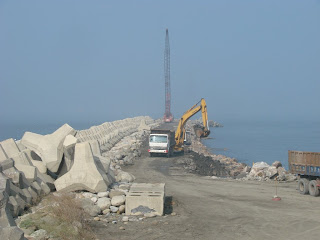 
It is time for the authorities to take a serious look at what they are doing to the West Coast. The dolphins are a top predator and umbrella species. Is the total collapse of the West Coast ecosystem really within our long-term interests? Are we not just giving a few very wealthy and greedy businesspeople a licence to rape the coast and we as the people will be burdened with the costs of this destruction for generations to come?
Posted by Wild at Heart Legal Defense Association at 12:01 PM 1 comment:

An upcomming paper of interest: Population differences in the pigmentation of Indo-Pacific humpback dolphins in Chinese waters