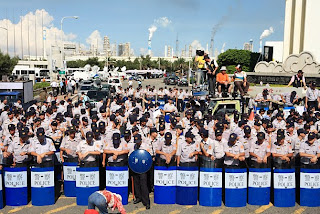 A local on her knees before legions of police officers guarding the Formosa Plastics management offices at Mailiao. Exasperated locals gathered to demand the government do something about Formosa Plastics and its toxic problems in the wake of the second fire at the plant in a month. A third Formosa-related fire raged down in Chiayi County last Sunday. 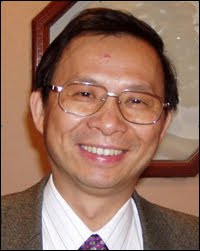 Accusations that Taiwan's Environmental Protection Administration (EPA) are nothing new. With Taiwan's legacy of almost four decades of Martial Law and five decades of one party dictatorship, rubber stamp government agencies have been a reality in Taiwan for most of its post World War II existence. The situation began to change after the first democratic elections in 1996 but old habits die hard and with the nationalist KMT regime returning to power in 2008 it would appear that the old bosses still have a preference for doing things the old way.

Indeed, you may be forgiven for mistaking Taiwan's Premier Wu Den-yih for a petrochemical executive and the EPA for Petrochemical Development Bureau. The EPA's continued favouring of development at the expense of the environment and the well-being of local communities is alarming. It is also creating a climate of desperation where whole communities feel powerless to stand against so-called development dictated by government. Supreme Court rulings are just ignored by the government and the government sends in the riot police as soon as communities voice their concerns. With the government's handling of the situation literally shutting the accepted legal avenues that communities have to address the situation by ignoring court rulings etc the government is setting the stage for a very dangerous situation where communities may well feel that they have no other option but to take the law into their own hands and that is usually a very sad and tragic road when travelled.


Also see:
Yet another FPG related fire
Photos of the Nan Ya Plastics Corp fire
Formosa Plastics on fire again

Opposition pressures Government in wake of the second Formosa fire

Candidates - No fallout from Formosa fire in Sinbei elections

Government defies the courts with the President's blessing

Isn’t It Time the Legal Community Spoke Up?

Science park development at Houli gets the nod
Shen's latest EPA green gimmick
Posted by Wild at Heart Legal Defense Association at 11:56 AM