Read the Vancouver Sun's article on the Taiwan humpback dolphins.

And even more windfarms

The extent of windfarm construction along Taiwan's west coast is alarming. While we support and understand the need for cleaner energy, we are alarmed at what appears to be the exclusion of consideration of the impact that such windfarms will have on coastal Important Bird Areas (IBAs) and humpback dolphin habitat.

Also see:
The impact of wind farm construction on the Humpback Dolphins

More offshore wind farms
Posted by Wild at Heart Legal Defense Association at 9:52 AM No comments: 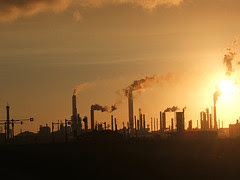 The Formosa Plastics Group proposed investing NT$706.8 billion (US$21.7 billion) in Taiwan over the next five years, yesterday. See today's Taipei Times for the story. Given the state of Taiwan's natural environment is this investment at all? What are the long term costs to Taiwan's environment and all who live here? It would seem that for now the glitter of gold blinds us to the growing typhoon on the horizon.
Posted by Wild at Heart Legal Defense Association at 10:30 AM No comments: 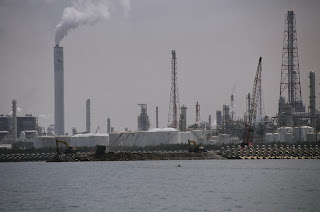 They say they're not there? A humpback dolphin in the inshore waters around the Formosa Plastics Plant at Mailiao, Yunlin County: Photo courtesy of FormosaCetus Research & Conservation Group.


The Taiwan EPA's Environmental Impact Assessment Commission held the 156th meeting on 1 October 2007. Two cases reviewed are of particular interest to those concerned with the plight of the humpback dolphins living along the coast of western Taiwan. Namely, the coal fired power plant in Taichung next to the Wu (Dadu) River estuary, and the Formosa Steel Plant next to the Formosa Plastics Plant which abuts the Jhuoshui River estuary.

Although several commissioners questioned the power plant's viability in light of central Taiwan's already exceeding its emissions limit, the chair (Minister of the EPA, Winston Dang) quickly gave the project approval. The plant must still go through a competitive privatization procedure at the end of the year before it can be finalized. The Formosa Steel Plant had been recommended by the previous commission for a second phase evaluation, however, the EPA has announced that the commission chose to go against that recommendation and instead instructed the EIA department of the EPA to put together another subcommittee to review the case as part of the first phase process. Second phase EIA's are considered more stringent and require considerably more public participation. The developers claimed during the meeting that there are no humpback dolphins off the shore of Yunlin despite environmental groups having passed out posters to the commissioners showing dolphins against the background of Formosa's Yunlin petrochemical plant.

Chairman of the Natural Trail Society of Taiwan has a point

Lin Shwu-ying, the chairman of the Natural Trail Society of Taiwan, speaking on his book titled Stories of 22 Communities which tells the stories of how twenty-two communities were able to improve their environment. Lin said that development projects such as the petrochemical plant that CPC Corp, Taiwan has proposed building would damage the coastline on the west coast. He also said, "The government was talking about doubling the number of visitors to Taiwan, and these natural resources should really be the selling point."

Click to read the Taipei Times article.
Posted by Wild at Heart Legal Defense Association at 11:32 AM No comments:

On Monday October 1 the Environmental Protection Administration's (EPA) Environmental Impact Review Committee voted to form a special taskforce to review construction of a Formosa Plastics steel plant in Yunlin. This was overruled by the EPA Minister. We'll be giving more details as soon as they become available. 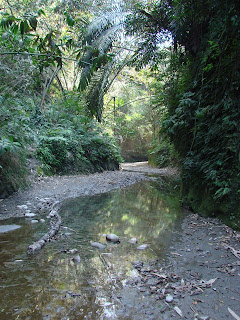 The You-cing Valley as it was before the Hushan Project

According to a report buried on page 20 of the 29 September edition of the Apple Daily, a subcommittee was formed to review Formosa Plastic's application to increase its water allowance from 251,000 tonnes/day to 351,000 tonnes/day. The report continued that the head of the Overall Planning Department, Huang Guanghui, said that the decision of the subcommittee would have to be approved by the plenary commission, which at the soonest will be in mid October. The report appears to have been accurate except that the original approved amount was 257,000 tonnes/day.

Interestingly, this case involves a number of issues that were headline news earlier this year, including the public's right to information about violations by developers of environmental laws or commitments made pursuant to the approval of their environmental impact assessments, whether there is a legal basis for the application by Formosa for a change in the water usage - the original commitment was backed by a pledge from chairman of Formosa Plastics who said they would shut down operations to the extent necessary to meet their commitment to keep water use down, and how on the day after Formosa Plastics chairman's visit to President Chen, the Executive Yuan canceled an NT$7 million dollar fine against the company for violations of its EIA. Just how long are corporations going to be allowed to keep reporting incredible profits each time financial reports are due at the expense of the well being of the environment and ultimately all who live in Taiwan and generations to come?

Well, it isn't surprising, when it is a choice between Wang Yongcing and Formosa Plastics need for cheap water and the marine life along the Yunlin coast: Taiwan's government continues to send the message that it wants our country to stay ahead of the competition for the worst environmental record among developed countries in the world, and while we're at it, let's see how quickly we can't get rid of pesky dolphins and Fairy Pittas before there is too much notice taken by the international community. 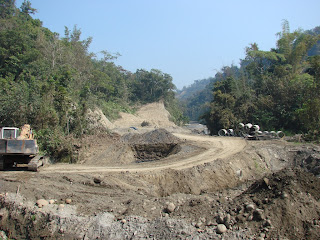 You-cing Valley being laid to waste as part of the Hushan Reservoir project to satisfy the "needs" of industry
Posted by Wild at Heart Legal Defense Association at 9:43 AM No comments:

The Hushan Reservoir figured prominently in the recent Taiwan Humpback Dolphin Workshop in that redirection of the water of the Cingshui River will exacerbate the reduction of freshwater flowing into the ocean, one of the major threats identified by scientists studying the animals.

We have just learned that Wild at Heart Legal Defense Association has sent another letter to the Yunlin County Government (YCG) and Cultural Affairs Bureau pointing out that the Bureau has taken no steps under the Cultural Resources Act to designate the area in Hushan in which significant archaeological ruins were discovered last year. Wild at Heart sent a letter requesting action be taken last April. However, despite the letter, there has been no indication that the YCG has complied with the provisions of the Cultural Affairs Act on the issue. A number of conservation groups are looking into taking legal action against the YCG and its central government counterpart, the Council of Cultural Affairs.

Also see:
Newly Discovered Archaeological Sites in the area of the Hushan Dam.