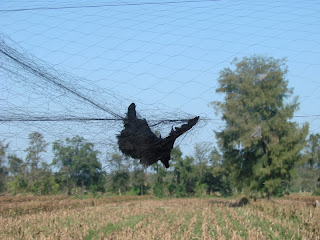 Bird trapped in a mist net. This one was already dead. We were able to rescue a few others.


Today's Taipei Times reports a protected Brown Hawk Owl Ninox scutulata was on rescued from an illegal bird net set up in the forests in Miaoli County’s Manapan Mountain (馬那邦山) area on Friday and sent to the Endemic Species Research Institute in Nantou County for emergency care.

Finally something about the rampant trapping of wild birds on Taiwan makes it into the press.

While the Brown Hawk Owl is protected under Taiwan's Wildlife Conservation Act the species isn't listed as threatened internationally on the IUCN's Red List of threatened species. However, locally on Taiwan the threat to the Brown Hawk Owl is such that it is listed as protected. The article goes on to say that two Mountain Scops Owls Otus spilocephalus and two Taiwan Hwamei Garrulax taewanus [Taiwan Hwamei is listed as 'Near Threatened' on the IUCN Red List] and other wild birds as also being found in the net which measured 200m-by-10m. The article also says that among the birds caught, only the Brown Hawk Owl was still alive when discovered by Forestry Bureau patrol officers.

The article then goes on to say, "the bureau said many people set up bird nets in mountainous areas to catch pigeons for ransom before the pigeon-racing season, but they often kill many wild birds in the process."

"The Hsinchu Forest District Office said that according to Article 19 of the Wildlife Conservation Act (野生動物保育法), it is illegal to set up nets or traps to capture wild animals and the capture or killing of protected species could result in a fine of NT$200,000 (US$6,570) to NT$1 million and a maximum sentence of five years in jail."

The article then ends by saying "The office said it would continue to crack down on illegal nets and traps in the area to protect the safety of wild animals in their habitat."

All very good claiming that it is illegal to trap wild animals but what's being done about it. The trapping of wild birds is rampant and takes place all over Taiwan. It's not hidden out of sight. It happens openly. Just take a trip on a TRA train down the island and you'll see the nets at regular intervals in rice fields, in fruit orchards, in vegetable gardens and even when there appears to be no apparent reason for placing a net there. This is taking place openly in just about every village across the island. Birds of all species are exterminated to protect produce. It doesn't matter if the species caught don't even eat what is being protected. All birds that fly into these invisible nets are destined to die a slow lingering death.

It's not just the farmers that net birds. You get the trappers that trap racing pigeons and then hold them for ransom. But countless wild birds also get caught in these nets and just get left to die. Others might be rescued and sold for release to religious groups. Birds being trapped for release by religious groups is big business in Taiwan. But we are told about 60% of these birds don't live to be released. They die.

Birds are also caught for the cage bird trade. About three years ago the protected status of many wild birds was removed and many endemic bird species can now be openly caught and sold. Just visit the local bird store. Each year in Taiwan countless wild birds fall victim to trapping. It is really time that something is done but don't count on it. Just like all the illegal trawling along the coast in full view of the coast guard. Forget the threat it poses to Taiwan's critically endangered pink dolphins. I hope we can hold the Hsinchu Forest District Office to their word that they are going to crack down on trapping. I'm sure if they put their mind to it they could bust several trappers in a morning. What's the bet that a month from now they've done nothing? 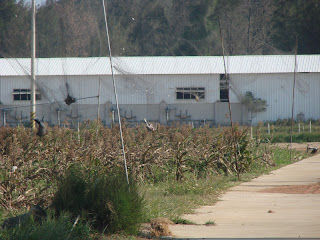 Mist net set to supposedly protect crops but such nets are indiscriminate in what they catch.
Posted by Wild at Heart Legal Defense Association at 2:34 PM 1 comment:

The Council of Agriculture (COA) has responded to the letter of concern sent by the Eastern Taiwan Strait Sousa Technical Advisory Working Group (ETSSTAWG) to the COA after the group learned of a proposal to conduct live-captures of the Critically Endangered Taiwan pink dolphins for the purpose of scientific research. The COA response is follows below.

The Council of Agriculture (COA) has received your email of November 5 and letter of November 2 regarding Indo-Pacific humpback dolphin Sousa chinensis.

The COA would like to clarity that currently there are no research projects involving live capture and tagging of Indo-Pacific humpback dolphin in Taiwan. Special review of research purpose and method is required before this kind of project can be carried out. Since above-mentioned dolphin is listed as protected species under the Wildlife Conservation Act (WCA), Article 18 of the WCA stipulates that prior approval from central government is also required for relevant research programs. In addition, the application needs to follow the regulation of Article 21 of the Enforcement Rules of the Wildlife Conservation Act regarding procedure and documents.

Thank you for your recommendations about reviewing research projects concerning Indo-Pacific humpback dolphin.

Posted by Wild at Heart Legal Defense Association at 7:27 PM No comments:

The Eastern Taiwan Strait Sousa Technical Advisory Working Group (ETSSTAWG) has sent a letter of concern to Council of Agriculture Minister, CHEN, Wu-hsiung after the group learned of a proposal to conduct live-captures of the Critically Endangered Taiwan pink dolphins for the purpose of scientific research. A copy of the letter follows below.

It is with considerable concern that we receive unconfirmed reports on a proposal to conduct live-captures of the Critically Endangered Indo-Pacific humpback dolphins (Sousa chinensis) in the Eastern Taiwan Strait (ETS) for the purpose of scientific research.

As you know, this population numbers fewer than 100 individuals, and faces a number of conservation threats including pollution, fisheries bycatch, reduced freshwater flow into estuarine habitat, noise, and loss of habitat due to land reclamation. The Eastern Taiwan Strait Sousa Technical Advisory Working Group (ETSSTAWG) consists of 17 international marine mammal experts. This group was established in 2008 to provide expert advice and feedback on matters pertaining to this population of Sousa.

Despite the weather-related difficulties in conducting field studies of Sousa in the ETS, recent work has demonstrated that Sousa are present year-round in the nearshore waters of Taiwan (Wang et al. 2011, Marine Mammal Science 27: 652-658). This was based on direct observations and photographic identification of known individuals from a small vessel.

Additional research might provide more insight into the presence, distribution, demographics and habitat use of Sousa in the ETS. However, this new insight for a Critically Endangered species must fundamentally be based on the ultimate goal of conservation and recovery of the population. Scientific research must not become a new conservation threat to members of this population.

The ETSSTAWG has solicited external expert advice on the risks and benefits related to possible satellite-tagging of ETS Sousa. We summarize the feedback that we received in this letter.

Live-captures and tagging of cetaceans elsewhere reveals some important gain in scientific understanding of marine mammal ecology, but also the following:

• captures cause stress in both the targeted individual and other members of the population during netting and capture operations. This can affect the health and well-being of the population.

• captures can kill individuals through drowning in nets, boat strikes, and/or stress.

• capture operations over a sustained period of time can displace members of the population from preferred feeding or resting habitat.

• the attachment of satellite tags to Sousa will cause injury, and can lead to subsequent infection, illness and even death after release.

• the process of capture, handling, tagging and release of the individual may very well change the subsequent behaviour, distribution, and habitat use of the individual. This means that even the best data collected from successfully attached tags may lead to erroneous results and conclusions.

• Even if one or more individuals move beyond their distribution as presently understood, this does not reduce the importance of protecting what has clearly been established to be ‘Priority Habitat’.

In short, tagging Sousa entails a high degree of risk to individuals, something that could lead to impacts at the population level. The ETSSTAWG strongly opposes any form of live-capture or biopsy sampling of individuals of this Critically Endangered population for scientific or other purposes.

However, the ETSSTAWG does recognize the merit in conducting non-invasive research that provides more insight into the habitat needs of this small cetacean. In this context, we urge members of the scientific and management establishment in Taiwan to consider the following non-harmful research options to supplement what has already been published in the scientific literature:

• A combination of acoustic and sighting efforts to provide complementary information.

• Increased efforts to monitor bycatch of small cetaceans and to recover any dead carcasses of ETS Sousa.

We note that in other regions where other populations of Sousa are being studied (e.g. Hong Kong), a combination of non-invasive approaches have been very successful in generating high quality scientific results in support of management.

In reviewing any research proposal that involves ETS Sousa, the ESTSSTAWG recommends that:

• The need for the study must be clearly explained, including a description of the potential way in which results will lead to different management scenarios.

• Why other methods fail to deliver answers to the questions posed.

• A comprehensive summary of the risks to members of the population associated with the study proposal must be included.

• The potential for physical or physiological trauma leading to compromised health or reduced reproductive potential be fully described.

• The minimum sample size required to generate information of value be discussed and explained in detail including statistical analyses.

• If there exist any risks to individual members of the population, the consideration of alternative study designs or approaches to research must be included and described.

In summary, the ETSSTAWG does not support any proposal to live-capture members of the ETS Sousa population or any study which relies on invasive methods such as biopsies. The risk of disturbance, injury and/or death outweighs any possible benefit associated with the resulting scientific information. On the contrary, the ETSSTAWG strongly considers non-invasive alternatives using a combination of acoustic technologies and direct observation to be likely to generate more defensible and meaningful scientific information without further harming this population.

Finally, while additional evidence of year-round habitat use along the nearshore waters of western Taiwan would incrementally improve our understanding of ETS Sousa ecology, it should not detract from the importance of protecting this area from impacts. Simply put, the shallow nearshore waters of the eastern Taiwan Strait represent Priority Habitat for ETS Sousa, and efforts must be made to reduce the threats of bycatch, pollution, freshwater discharge, noise and land reclamation in this area (Ross,P.S. et al, 2010. Averting the baiji syndrome: Characterising habitat for critically endangered dolphins in eastern Taiwan Strait. Aquatic Conservation: Marine and Freshwater Ecosystems 20: 685-694).

As always, the ETSSTAWG remains openly available for those seeking advice on matters related to ETS Sousa.