Scaling down Kuokuang Petrochemical to get EIA passed

The Taipei Times reports that the Kuokuang Petrochemical Park investment project will be scaled down to increase the chances of it passing an environmental impact assessment according to state-owned oil refiner CPC Corp. It appears that the new strategy to get this environmentally destructive project's environmental impact assessment(EIA) passed is to scale it down and get that passed and then increase the size of the planned petrochemical park by submitting small expansion projects to ultimately achieve the original planned petrochemical park. See Petrochemical plan to be scaled down: CPC Corp, Taiwan in the Taipei Times.
Posted by Wild at Heart Legal Defense Association at 4:17 PM No comments: 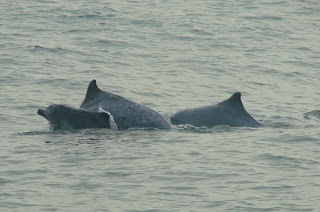 
"Because every green measure, every conservation effort and all the little economies we could make in our daily lives, may look insignificant if we choose to look at the big picture. On the other hand, if we view that big picture as millions of little choices made by people just like us, that's how we can come to understand why it's our own choices that are so important."
A comment posted on Birdforum by James Owen.
Posted by Wild at Heart Legal Defense Association at 10:49 PM No comments:

1st Workshop (2004)
Report Of The First Workshop On Conservation And Research Needs Of Indo-Pacific Humpback Dolphins, Sousa Chinensis, In The Waters Of Taiwan.

Research Action Plan For The Humpback Dolphins Of Western Taiwan.
Posted by Wild at Heart Legal Defense Association at 9:08 PM No comments:

On Tuesday 14 December a legislative hearing on the planned Kuokuang petrochemical complex was held in Dacheng, Changhua County. The hearing was characterised by anger and frustration. It was a fine example of what a failed hearing was. But that may well be just what the Ministry of Economic Affairs (MOEA) wanted. See the following letter, MOEA runs Kuokuang hearing into the ground by attorney Severia Lu and Janis Wang from the Wild at Heart Legal Defense Association that appeared in the Taipei Times last Wednesday.

Public reaction was originally quite positive because transparency and public engagement are needed for issues this controversial and it would be the first time in Taiwan a hearing of this kind had been required, aimed at clearing up any contentious issues through a thorough discussion.

However, the ministry held the legislative hearing in Dacheng, Changhua County, yesterday, amid angry — and sporadically violent — scenes outside as many people were denied access because of the high turnout. And, according to our understanding, those who could enter were limited to three minutes in which to voice their opinions. There was no preparatory hearing.

Yesterday’s events attest to the uniqueness of the Kuokuang case and the special handling it requires. Not only is the case hugely complicated, it has also been highly controversial, not only among members of the public, but also among thousands of academics and members of Academia Sinica.

While it is true that Article 58 of the Administrative Procedure Act allows administrative bodies to use their own discretion in holding these preparatory hearings, the MOEA’s perfunctory approach to this process has been a waste of legislative resources and an insult to the intent of the act.

The format of the legislative hearing the ministry insisted upon was little different from other public hearings we have seen related to this case, held under the requirements of the Environmental Impact Assessment Act (環境影響評估法). Each side gets to say, or rather shout, their piece, and the exchange just descends into an ideological slinging match that goes nowhere. This shows the importance of a preparatory hearing, in which each side is allowed to present their main points, focus on the contentious issues and exchange information. Then, the objective of the legislative hearing is to enable the government to obtain the pertinent facts before it makes any decisions.

The ministry’s International Trade Commission (ITC) frequently holds administrative hearings, so the ministry clearly has a lot of expertise and experience in such things. However, the MOEA appears to have decided not to allow pertinent information to be considered on the Kuokuang case and to not allow other parties to participate in the process. These are little more than ploys to reduce potential controversy and risks.

If the government were really interested in hearing what the public had to say and in clearing up any issues and impacts this project would have on the lives and health of those who came to the hearing to voice their concerns, it would expect the MOEA to do its job and hold a meaningful legislative hearing conducted in a proper manner. The ministry should have had a preparatory hearing, and could have involved other government bodies. This would have ensured that the original intent of the Administrative Procedure Act was fulfilled, and would also have avoided further conflict.

Instead, the MOEA has tried to manipulate the system and, in doing so, demonstrated its contempt for a resolution made in the nation’s legislature. It has trampled roughshod over the Administrative Procedure Act and seriously damaged public trust in the nation’s administrative institutions.

Severia Lu is an attorney at the Wild at Heart Legal Defense Association. Janis Wang is a representative at the association.