And yet again! Eighth Formosa Plastics fire since June 2010 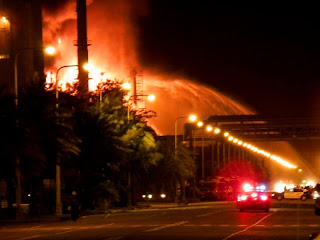 One of eight recent fires at Formosa Plastics. This one was in late July 2010: Photo courtesy of MFCU.

After seven fires in 15 months at the Formosa Plastics Group’s petrochemical complex in Mailiao, Yunlin County one would think that something really had to be done about their frequent fires. It would seem not. On Tuesday, September 6th FPG had fire number eight.

Formosa Plastics was the 2009 recipient of the infamous Black Planet Award; for those who have committed themselves to the destruction and downfall of our Blue Planet in an outstanding way.

The Formosa Plastics Group’s petrochemical complex in Mailiao is built on reclaimed land that was once prime pink dolphin habitat. Current and planned reclamation projects at the plant are further reducing the little remaining habitat of the critically endangered Taiwan pink dolphins. Shipping traffic at Mailiao Port and excessive pollution levels from the Formosa Plastics Plant are serious threats to the continued survival of the Taiwan pink dolphins.

See FPC Mailiao plant suffers another fire in the Taipei Times.
Posted by Wild at Heart Legal Defense Association at 1:50 PM No comments: