With the Lunar New Year holidays and a trip to Korea we haven't been able to post much during February. No fear. The silence doesn't mean things haven't been happening. On the dolphin front we have been working away on the issue. Wild at Heart sent two delegates to the Jeju WildLife Research Centre Workshop on Jeju Island, South Korea, from Feb 22-26 and they delivered presentations on the Fairy Pitta. A presentation on threats to the Fairy Pitta included Hushan Dam and briefly covered the humpback dolphin issue. Matsu's Fish Conservation Union has been having meetings and another meeting will be taking place in Lukang on Saturday 1 March 200. On Monday 3 March 2008 we will be visiting the Hushan Dam site and a meeting of concerned parties will also take place. Access to the Hushan Dam site is restricted and this will be the first time in months that we've been allowed into the area. Reports on what has been happening and Monday's visit will be posted next week.
Posted by Wild at Heart Legal Defense Association at 2:15 PM No comments: 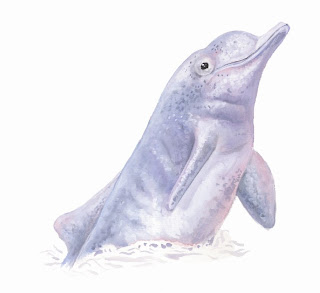 To all those celebrating the Lunar New Year we wish you a Happy New Year and all the best for the Year of the Rat !
Posted by Wild at Heart Legal Defense Association at 3:20 PM No comments: 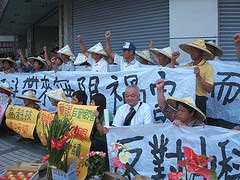 Houli farmers protest in front of the EPA in 2006.

The official announcement was made yesterday that the phase-one Environmental Impact Assessment (EIA) for Taiwan’s Central Science Park development on Ci-sing Farm, Houli, which was approved by the Environmental Protection Administration (EPA) in 2006 under circumstances which caused outrage among EIA Review Committee members, has been cancelled by the Administrative Court. This is the result of a lawsuit brought by six farmers from in and around Houli Township, Taichung County, who are represented by a group of lawyers including Lawyer Lin San-Chia and Lawyer of Record Chen Bo-jhou of Wild at Heart Legal Defense Association.

Besides being a success for farmers in and downstream of Houli, today’s announcement is also good news for Taiwan’s Indo-Pacific humpback dolphins, whose habitat includes the estuaries of Dachia River and Daan River. According to the conclusion of the Second International Workshop on Conservation and Research Needs of the Eastern Taiwan Strait Population of Indo-Pacific Humpback Dolphins, held in Chuanghua City in September 2007, two of the five main threats to this small population of dolphins are pollution and reduction of freshwater flow into their habitat.

Continue reading the story on the Wild at Heart website.
Posted by Wild at Heart Legal Defense Association at 10:49 AM No comments: