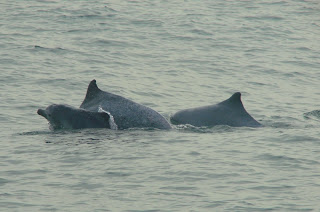 To help create awareness of the plight of Taiwan’s critically endangered Pink Dolphins and the need to protect our coastal wetlands we invite you to take a jog for our dolphins with us along the west coast. 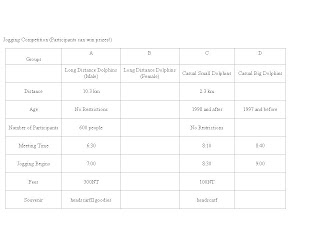 Prizes:
First three in each group will receive prizes and pins. We plan to start the prize ceremony at 9:30 (Participants must be present).
The eldest and youngest participants will also receive prizes.

Certificates:
Only for the 10.3km run. Please indicate that you would like a certificate on registration. We are unfortunately unable to provide ranking and race times due to limited staff.


Registration and Fees:
Please note there is no on-site registration. Please sign up online before Friday, August 19, or fax your registration form to 04-7769516 or email it to 7626609@gmail.com
This event uses ATM transfer for payment. Please sign in online after payment to complete the registration process.

Code 700
Account Name: Chuanghua County Environmental Protection Union/彰化縣環境保護聯盟
Account Number: 0081038-0396277
After finishing registration, you will receive confirmation from the hosting organization.
Once registration is completed, no refunds will be given.

By mail
If unable to check-in with the above method, please check in by mail (indicate during registration). The mailing cost is 55NT/form if under 10 people. 10 people or more requires payment at delivery (limited to within Taiwan)


Accommodation (must indicate during registration):
Participants who arrive on 9/17 at night can reserve rooms at Pu–tian Temple. 100NT per person. (Please arrive before 8pm on 9/17)

Changhua Environmental Protection Union is holding its annual jogging competition to raise awareness of the plight of Taiwan’s critically endangered pink dolphins and the need to protect coastal wetlands. 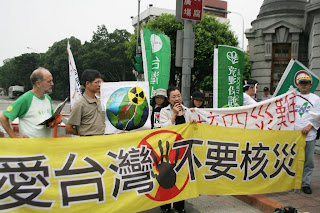 On the eve of World Environment Day, environmental groups staged a demonstration urging the president to rethink the nation’s nuclear power policy. See the Taipei Times for the story.
Posted by Wild at Heart Legal Defense Association at 1:25 PM No comments:

Pink Dolphins and Kuokuang Petrochemical in the New York Times 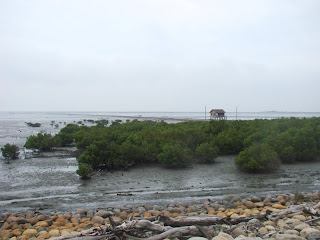 The internationally listed Dacheng wetlands which Kuokuang wanted to turn into a petrochemical complex.


On June 5th an article titled "Activism Gets Rolling in Taiwan" by Taiwan-based journalist Ralph Jennings featured in the New York Times. The article focuses on how a recent wave of opposition has halted the planned Kuokuang Petrochemical Project and how issues such as the plight of the Taiwan pink dolphin have become major issues in Taiwan. We're grateful for the publicity that the article gives the Matsu's Fish Conservation Union and our colleagues at Wild at Heart. While organisations such as ours have played their part in focusing attention on issues such as Kuokuang and the plight of the pink dolphins it would be wrong to overlook the fact that many Taiwanese have had enough of the environmental damage done by greedy organisations and individual through their irresponsibly managed heavy industry and have got to the point where they've said "This must stop now!"

See Activism Gets Rolling in Taiwan in the New York Times.
Posted by Wild at Heart Legal Defense Association at 3:11 PM No comments:

The following is a rough English translation of an article that appeared in a recent edition of the Hanji language Tian Sia magazine.

"I was finally able to sleep better last night," the Yunlin county magistrate Su Chi-fen said. Although she was smiling, fatigue and burden were evident on her face.

Her sports jacket, sneakers, and messy hair all reveal how stressed she has been over the past year. "Since last July, every time I think about the issue at the Sixth Naphtha Decomposition Factory, it’s almost as if a dark cloud were right above me," she said. In the eleven months from July 7, 2010 to May 18, 2011, Formosa Plastics has had four fires in the Sixth Naphtha Decomposition Factory.

Last Friday (May 27), Su Chi-fen made a decision that shocked the Formosa Plastics Group and other such industries around the globe. She demanded that Formosa Plastics’ vinyl chloride factory and South Asia Hai Feng factory both in Mailiao [Yunlin County] would terminate operations starting on June 1.

This is Formosa Plastics’ largest work suspension since the group was first founded forty years ago.

Using the idea for the first time in Taiwan that local government can demand work suspension within the petrochemical industry, this move by Su Chi-fen has had a profound impact on the economy.

The suspended South Asia Hai Feng factory is the fourth largest producer of vinyl chloride in the world and the third largest producer of diphenol. These are the main sources of profit for the South Asia Hai Feng factory. "Tian Sia" magazine learned from Formosa Plastics that the work suspension will cost them NT$34,400,000 a day. The downstream manufacturers’ fight for remaining materials has also become a serious concern.

The political trend has also changed.

"My friends have warned me to watch out for my own safety," Su Chi-fen said at 9pm at Taichung Railway Station. She showed signs of the pressure on her an hour after the interview. "Formosa Plastics’ relations are really good, from top to bottom," she emphasized.

Why is she so brave to make this big decision? Why now?

This May’s fire wasn’t as big as last July’s Naphtha Decomposition Factory fire. Why was there no heavy punishment at that time? Why is there work suspension and a NT$5 million fine this time round?

Although Su Chi-fen doesn't aknowledge it, the political trend has changed.

First, on April 22, President Ma Ying Jeou announced that he no longer supported the Kuokuang Petrochemical project and that the petrochemical industry must operate with higher quality standards.

Even though their biggest competitor, the Kuokuang Petrochemical project, has been stopped for now, Formosa Plastics’ Sixth Set Naphtha Decomposition Factory has not gained anything from this.

On May 12, the Sixth Set Naphtha Decomposition Factory’s pipelines for liquefied petroleum gas and isodecyl alcohol leaked and caught fire.

Shi Yan-siang, Minister of Economic Affairs, has always been an affable and easy-going man, but this time, he declared solemnly, "No worker safety, no petrochemical." He insists on supporting relevant responsible organizations to clarify the reasons for the fire and ensure everything is done strictly following the law.

The change in attitude of high-level officials’ is making lower-level personnel bolder.

After the fire on May 12, even Lian Jin Chang, Industrial Department deputy chief, personally delivered documents and explained legal rules on behalf of the Yunlin County Government. The documents were delivered on the 17th and returned to the Yunlin County Government on the 19th. It only took three days to confirm that the pipelines belong to the factory’s facilities and are subject to the Factory Management Advice Act’s 21st line and 3rd item: County departments must demand work suspension and ask for improvements.

In a meeting at the Department of Economic Affairs, he said, "If our department has the nessesary swords, I’d definitely go after them."

The Central Government gives the "Swords."

This time, the Central Government’s change in attitude empowered the Yunlin County Government.

Su Chi-fen admitted that the local government has to follow the laws when fining and punishing people.

For this cause, she asked the Democratic Progressive Party’s Legislative Department’s convener, Ke Jian-min, to hold a closed-door meeting discussing worker safety at the decomposition factory. Two days before the meeting, they also invited officials from the Central Government: Department of Economic Affairs’ Energy Office, The Interior Department’s Fire Department, Department of Construction, Department of Environmental Affairs, and fourteen other officials and county groups that are close to her. They had a debate over the best way to handle fifteen problems.

Something bad will happen again at the Sixth Set Naphtha Decomposition Factory.

The next day, Yunlin County’s Director of Construction Department and Minister of the Environmental Affairs Department both attended the "Formosa Plastics Mailiao Industrial Area Safety Management Meeting" held by the Vice Minister of Economic Affairs. During the meeting, the Central Government did not oppose the punishment administered by the Yunlin Country Government.

That night, Su Chi-fen wanted to hold a meeting with her supporting staff to establish boundary lines for local government. "Find the category, and I’ll make the decision."

"I’ve had a lot of discussion with county officials, from last year until now. There were at least a hundred meetings on worker safety at the Sixth Set Naphtha Decomposition Factory." In addition to trying to convince Central Government, Su Chi-fen also has to persuade her own staff that she is right. "I held so many meetings, because I don’t want to force any official to stamp anything reluctantly."

The confirmations and careful communication within and outside local government, along with the Central Government’s political trend since April, led to Su Chi-fen’s important decision made on the 27th to suspend work.

Although this might affect the Taiwanese economy, Su Chi-fen insists that the safety of the people in Yunlin is far more important.

She recalls her own incident at the fire scene on May 12. The fire was huge. Su Chi-fen was standing up wind, but when the wind direction changed, water from the firefighters’ hoses splashed over her.

While standing in the wind, she remembered an expert warned her that in April something bad would happen at the Sixth Naphtha Decomposition Factory this summer. Cold sweat was all over her body. Frightened, she kept asking why the expert said so.

The Central Government should conduct a national-level survey.

"I often think about what should be done to make the Central Government pay attention to this problem and to make high-ranking officials at Formosa Plastics realize that work safety is not a kid's game," Su Chi-fen said. This is why she decided to enforce a heavy punishment, so that Formosa Plastics can measure and compare the costs and profits of their behavior.

The condition for restarting the operation requires Formosa Plastics to have their pipelines checked in an advanced country and meet the proper safety standards (USA’s API570 pipeline testing range). The government must also conduct a national-level check-up to clarify the real reason.

This "new relationship" will be a new challenge for Formosa Plastics and all other companies in the petrochemical industry.
Posted by Wild at Heart Legal Defense Association at 2:15 PM No comments: