Meeting with the military

On 2 June, representatives from Wild at Heart, Changhua Environmental Protection Union and Matsu’s Fish Conservation Union met with officials from the Ministry of National Defense to begin discussing ways to reduce the risk of impacts of military activities on Taiwan’s Critically Endangered humpback dolphins and other marine mammals. 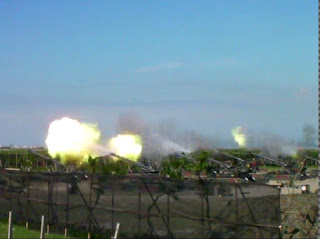 At the meeting, chaired by Legislator Tien Chiu-chin, the groups emphasized that, while their concerns had been heightened by the direct bombardment of humpback dolphin habitat from the shore near the Dachia River estuary in May and June, the potential impacts of other activities, including military sonar, on marine mammals also need to be addressed as soon as possible.

Mid-frequency sonar has been shown to have caused fatal mass strandings of four species of whale in the Bahamas in 2000, and possibly in other locations including the Canary Islands, Greece and Hawaii. Mass cetacean strandings have also occurred in Taiwan, including incidents in 2004 and 2005 that coincided with large-scale naval exercises in the region.

Wild at Heart proposed that Taiwan’s military design and implement a standard operating procedure (SOP) to protect marine mammals, as exists in various forms in countries such as Italy, France, Australia, the US and the UK.

MND representatives explained ways in which the military could improve protective measures during exercises next year, such as by moving the target several kilometers further from the shore. However, no response was given regarding sonar or other sources of noise and other disturbance.

The conservation groups and the MND agreed to continue discussions.
Posted by Christina MacFarquhar at 5:40 PM No comments: