12 September 2019
Taiwan Environmental Information Center editor Chen Wen-tze
The Ocean Zhu-Nan (Formosa I) Offshore Wind Power Plan (Formosa I), located in the coastal waters outside Miaoli County, entered its trial operation phase in September https://e-info.org.tw/node/220055[1] , expects to be completed by the end of the year to become the first commercial-scale offshore wind farm in Taiwan. However, when the underwater foundation piling operation was carried out on June 21, July 8, and July 10, the Environmental Protection Agency discovered that it did not send enough observation vessels and cetacean observers thus violating its Environmental Impact Assessment (EIA) commitments. On August 28, the Environmental Protection Agency (EPA) formally issued a disposition, and in what is the first such action against offshore wind farms, levied a fine in the maximum amount of NT$1.5 million [approximately Euro 43,000] in accordance with the EIA Act.

The EPA said that more wind farms will begin construction next year. The EPA has already discussed with the Coast Guard, the Ocean Conservation Administration, and the Bureau of Energy setting up a specialist team for inter-agency matters so that the developers will not treat lightly the ability of the EPA to monitor the EIA.

The Formosa 1 project passed environmental impact assessment [EIA] review in 2013. In order to mitigate the danger from piling noise on cetaceans, the developer committed in its EIA to dispatch ten observer vessels with marine mammal observers onboard. The observers must first confirm that there is no cetacean activity for at least 30 minutes in the warning zone before piling can begin. If cetaceans are discovered in the warning zone, the construction unit must stop piling [1].

The EPA said that Formosa 1 originally committed to send 10 observation vessels but on June 21, only two vessels were dispatched during the piling, and on July 8 it was also two vessels and on July 10, no vessels were dispatched, all in violation of the EIA commitments. When the EPA discovered the first violation by the developer, it issued a warning and collected evidence, however, the developer continued its violation and being a serious case, in accordance with article 17 of the EIA Law, the EPA imposed the maximum penalty of NTD1.5 million.
Chiang Tzu-nung, deputy head of the EPA’s Supervision Team, said if the developer disagrees with the disposition, within three months of receipt of same it may file an appeal and administrative lawsuit.

He explained that poor weather cannot be used as an excuse for not dispatching observer vessels. The industry knew of this possibility when it made its EIA commitments. If the weather is not good, the industry can stop the construction, but if construction must proceed, then they must dispatch the observers.
Chiang Tzu-nung said that this is the first time the EPA has punished offshore wind development and the penalty is the highest. In addition, this case will also let other offshore wind developers that they must comply with the commitments made during the EIA process.
Construction of wind farms begins next year; EPA plans to establish an inter-agency platform
At present, the offshore wind power piling part for Formosa 1 has been completed, but other aspects of the construction also implicate matters relevant to EIA supervision. More than 700 wind turbines are expected to be built before 2025. The next wind farm is expected to enter the market next May, so the enforcement capacity of the EPA is in for a test.
Chiang Tzu-nung pointed out that the EPA has no vessels and it is difficult to enforce the law at sea. In order to strengthen supervision, the EPA has already called on the Ocean Affairs Administration, and is looking for cooperation from the Coast Guard Administration, the Bureau of Energy, and the Fisheries Agency to form an inter-agency platform. The Coast Guard has vessels and the Bureau of Energy has the responsibility, Ocean Conservation Administration has authority and the Fisheries Agency has fishing vessels, all of which in combination with the EPA will form a special task force.

Chiang Tzu-nung said that the Formosa 1 project is a wind farm that is relatively close to the shore and future wind farms will be relatively further from shore, making supervision be more difficult. The EPA will step up it's planning for an inter-agency task force, which when confirmed, will be announced and in addition to letting the public and the environmental groups know about the government’s conduct, and also let the developer know that just because the EPA has no vessels, does not mean the EPA will not catch violators.

In addition to the EPA, environmental groups are also tracking these violations. On 28 June the media ran an op-ed https://e-info.org.tw/node/218761 by Kurtis Jai-Chyi Pei, Professor at National Pingtung University of Science and Technology and Robin Winkler, chair of the Taiwan Matsu’s Conservation Union.[2] In mid-July, the environmental group filed submitted a "Citizens Notice" with the EPA https://e-info.org.tw/node/219068 asking for strict enforcement and punishment of the developer for its violations.[3] 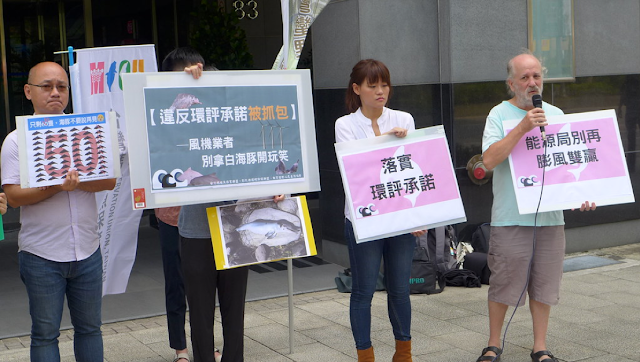 Taiwan Matsu’s Fish Conservation Union Chair Robin Winkler criticizes the selection of off shore wind farm sites for the piling noise and say’s there is no “win win”scenario. Photo by Sun Wen-lin. 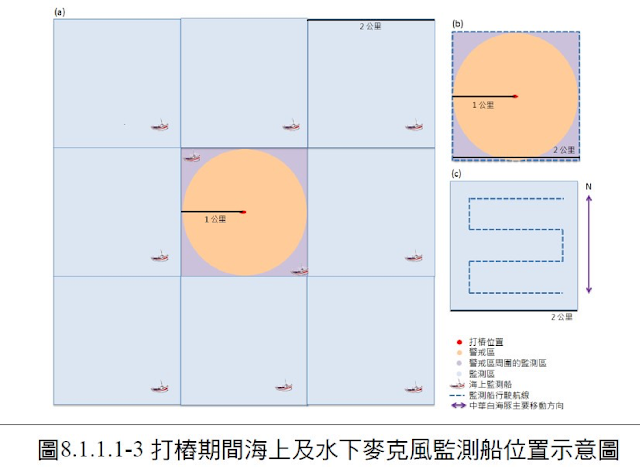 Formosa 1 during piling has a warning zone with a radius of 1 km, and an observation range of 2.8 to 5.3 km (Note: different developers have different commitments and methods). Sourced from the Formosa 1 EIA Report.

3 The number of observation vessels should be calculated according to the total monitoring area and the observation range of the trained cetacean observers, which is about 1 km; and assuming that the piling noise can be transmitted everywhere in the deep waters, two vessels located at the corners around the warning zone are located at 2 km of the rectangle cruising on clockwise or counter-clockwise trajectory; with each vessel traveling at a speed of 6 knots on an 8 kilometer route it will take 43.2 minutes, and in the monitoring area there is a vessel every 4 square kilometers and each vessel travels at a speed of 6 knots so the 7.5 km route takes 40.5 minutes; the total monitoring area is 36 square kilometers and a total of 10 observation vessels are required (as shown in Figure 8.1.1.1-3).

Posted by 台灣媽祖魚保育聯盟 at 3:55 PM No comments: