Canary in the mine shaft, another rosy tale. 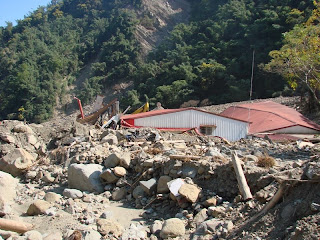 
On the 13Th December 2009 the Miami Herald ran a piece by Joe Oglesby titled Canary in the mine shaft which really typified the type of rosy picture the Ma-led KMT regime likes to paint of Taiwan and its commitment to global warming, the tragedy of Typhoon Morakot and other environmental issues.

Robin Winkler, a Taipei-based lawyer and former Commissioner on Taiwan’s Environmental Impact Assessment Committee wrote a response to the Miami Herald's piece. Regrettably they didn't publish his letter. We've decided to post Robin's letter with a link to the Miami Herald article and readers can decide for themselves if Joe Oglesby and the Miami Herald are giving a misleading view of what's happening in Taiwan.

Joe Oglesby (Canary in the mine shaft, 13 Dec.) and hence your readers have been misled by the Taiwanese government about its supposed commitment to do something about global warming.

While I served as a Commissioner (2005-2007) on Taiwan’s Environmental Impact Assessment Committee, the Committee approved projects that had been proposed by developers that will increase Taiwan’s CO2 emissions by 43%. All of those projects were screened, and in many cases proposed by government agencies. This against the background of Taiwan having several of the largest and dirtiest coal fired power plants, our having been ranked number 145 out of 146 in the World Economic Forum’s 2005 Environmental Sustainability Index and our distinction of being the fastest growing greenhouse gas emitter among developed countries for the period since 1990.

The current government of president Ma Ying-jeou has continued to support and fund these projects while proposing many new ones such as the recently approved fourth stage expansion of the Central Taiwan Science Park, a major expansion of the Formosa Plastics Off-shore Petrochemical facility in central Taiwan and a mega “petrochemical science park” that will go in over tidal flats, wetlands and is to be located just across the Chuoshui River from the Formosa Plastics project.

The energy intensive expansion of the Central Taiwan Science Park for example, half of which will be use to site production facilities for TFT-LCD manufacturer AU Optronics on prime farmland, will drain 160,000 tons of wastewater daily into nearby estuaries that are home to Taiwan’s critically endangered population of Indo-Pacific humpback dolphins (Sousa chinensis). Mr. Ma’s concern for Taiwan’s wildlife is highly selective at best.

While I have no doubt that Mr. Oglesby is a journalist of the highest ethical standards, the fact remains that he visited Taiwan on a junket funded by the Taiwan’s Government Information Office. Naturally, the information presented to the non-Chinese speaking journalists on the trip was selective and intended to ensure that the Taiwanese government’s message that Taiwan is doing its part in the fight against global warming would reach readers like those of the Miami Herald.

Studies by international organizations conclude otherwise. Between 2006 and 2008, Taiwan slid sixteen places in the World Economic Forum’s Environmental Performance Index. Even more recently, Taiwan fell from No. 32 to No. 47 on Germanwatch’s 2010 Climate Change Performance Index much to the chagrin of the Ma administration, which is resorting to the old politician’s trick of blaming the former administration. As in the United States, there are bitter political divisions between Taiwan’s two main political parties but the truth is that both share responsibility for the state-backed short term economic development policies that are degrading Taiwan’s environment and driving its rising carbon emissions.

As for Taiwan’s “good track record” on monitoring landslides, Mr. Oglesby has failed to report that although the government does indeed gather vast amounts of information about geologically sensitive areas, it is very difficult for members of the public to get access to this information because of pressure from land developers and other interest groups who do not want to see property prices depressed. In any event, that information and the “hundreds of environmental laws” passed by Taiwan’s legislature (in fact there are only 12) did nothing to save the more than 600 people, most of who were Plains Aborigines, who died when Typhoon Morakot triggered the mudslide that wiped out their village.

Taiwan talks the talk on climate change, but it does not walk the walk.

Robin Winkler is the founder and director of the Wild at Heart Legal Defense fund. Born and raised in the US, he has resided in Taiwan since 1977 and became a citizen in 2003 to prevent deportation for his environmental activism.

Also see:
The proof of the pudding is in the eating: The Chingshuei River after Morakot (includes photos).

Typhoon Morakot: The Writing's on the Wall