In addition to the article that appeared in this morning's Taipei Times other English articles have appeared in the English-language press.

Let’s All Pick a Fight with Formosa Plastics
Posted by Wild at Heart Legal Defense Association at 3:02 PM No comments:

Let’s All Pick a Fight with Formosa Plastics

We received the following which was circulated before the press conference by academics in support of Professor Tsuang Ben-jei (莊秉潔) of National Chung Hsing University’s (NCHU) department of environmental engineering who is being sued by Formosa Plastics Group for comments he made at an Environmental Protection Administration EIA meeting regarding cancer rates around FGP's Mailiao Plant in Yunlin County.

A few days ago I received a letter from JHOU Gui-tian and CHEN Ji-jhong asking whether I could join in a petition against Formosa Plastics for having filed a lawsuit against Professor TSUANG Bing-jie.

The plaintiffs in the lawsuit are Formosa Chemicals & Fibre Corporation and Mai-Liao Power Corporation. On closely reading the civil complaint that was attached to the letter I discovered that the Formosa Plastics affiliates and their lawyers accused Professor TSUANG of having injured the reputations of the companies by having cited or transmitted information contained in a study and report that the [Taiwan] Environmental Protection Administration had retained Chung Hsing University to conduct and produce concerning factory emissions of heavy metals and dioxin. I recalled having seen the news on these reports last year but never guessed that Formosa Plastics, rather than taking to heart the numerous incidents of worker and environmental safety, would instead take this drastic legal action against the professor seeking the unimaginable sum of forty million New Taiwan dollars (approximately 1.3 million US$).

I was reminded of that book about Diane Wilson; An Unreasonable Woman.

Diane Wilson lives in Calhoun County on a bay in Texas where fishers and shrimpers are everywhere, a town where there isn’t even a stoplight. She had a fishing operation and had been noticing that the catch was constantly decreasing. Then one day she read a report that said the US EPA ranked her county as the most polluted in all the USA. Then it started to make sense – the dead dolphins, the inedible contaminated shrimp, the wetlands that were choking, and birds gone extinct and all the while the cancer rates shooting up. Something had happened in Lavaca Bay.

The chemical plants thought Diane. Based on her own observations the pollution coming from the Taiwan-based petrochemical manufacturers in the bay was becoming more and more obvious.

It was just around this time that the people in Yilan County rejected the Sixth Naphtha Cracker plant, so Formosa Plastics took its three billion US dollars and went to Texas announcing expansion of its plant there into a modern technologically advanced zero pollution plant. When Diane organised environmental groups to stop the expansion plan many local people suspected that she was taking money from people who wanted the plant to locate in their country, or that her data was faulty. There were those who sang the mantra of “high tech” and those who lambasted Diane for speaking out when so many people were out of work. There were even those who said the Formosa Plant would help reduce the incidence of mental illness in the area…….

In order to attract “The Pearl of Texas” and alleviate unemployment in the area, Calhoun County spent two hundred and fifty million dollars to dredge the bay so that Formosa’s ships could get to their port while extending to Formosa Plastics all kinds of favorable tax treatment. To what end? Well, WANG Yong-cing, according to one reporter mentioned in the book, was just a pirate aristocrat who would get up early in the morning, go for a run, do his pushups and pass the days in relative austerity. In the meantime he basically let all of his factories pollute like crazy, dumping their waste into the harbour or into the ground and emitting vinyl chloride and ethylene chloride poisoning the bodies and souls of the employees and the people living around their plants.

So why didn’t the officials get to the truth about Formosa’s operations? Because Formosa covered up the test results, falsified records, bought off officials and paid off scholars to produce favorable reports. Diane wrote: “their spokesperson appears to be sincere and so does Formosa, it was as if they thought the dirty air they were emitting, the big stinky fuel warehouse, the transfer pipes, they made it all, just as though they were manufacturing rotten bananas….”

Diane Wilson was only sued, she also received death threats, her lawyer was bought off, but she fought on for years. She went on several fasts in protest of the plant and was able to force Formosa to sign a “zero pollution” agreement. From this time Formosa Plastics gained enormous negative publicity in the US, while Diane, “the woman who was as unreasonable as the ocean” began winning all manner of awards for her work. Clearly, the Earth had ruled in Diane’s favor.

If it were not for scholars like Professor TSUANG standing up to these giant polluting monsters, these companies without a conscience would be free to go on spinning lies and squeezing the land for every bit of wealth they can leaving behind a legacy of devastation, while all the time making pretensions of being a charitable company.

No doubt Formosa Plastics will be able to find scholars to support them and they may be able to win a symbolic victory in the courts. But there is no question that Formosa’s substitution of the courts for scientific research and adding such a huge claim of damages, while perhaps only a small symbolic victory, its intended effect is to “chill” any thing that may come out of the academic community that could be construed as critical of Formosa. To be sure Professor TSUANG is a target, but the intention is to instill fear into the hearts of all scholars who might come up with research results that are anything but complimentary to Formosa.

When Formosa Plastics denies the truth, “they don’t have any guilty conscience,” Diane Wilson says in her book An Unreasonable Woman [called The Woman Who Dared to Stand Up and Challenge Formosa Plastics in Chinese edition]. And the way Yilan County rejected plans by Formosa Plastics to build the No.6 naphtha cracker in their county is a testimony to Taiwanese spirit:
"Three years ago, Shih said, Wang had promised them that his plants would be so clean that goldfish could be raised in the wastewater from his Yilan plants. Wang Yung-Ching said he wanted the wastewater from his plants safe enough to drink. But what have been the results? The Lung De plant in Tapei has received the most fines ever by the government. Every worker in Yilan knows that Formosa emits illegal pollution in the night and that it shuts off its wastewater pipes before inspection by the Public Health Agency. So they could not trust them to deliver what they promise."
(An Unreasonable Woman: chapter 28 “Island of Fire and Solidarity” pg 344.)

Naturally, I joined the petition and I also decided to return to Taipei to join the press conference on 29 April. We plan to initiate a movement at the press conference that will spur a movement of “I too will stand up to and pick a fight with Formosa Plastics” so as to let Professor JHUANG’s value become 100 million, a billion, ten billion, 100 billion --- to become the incalculable value of a life, the incalculable value of a clear blue sky.

Posted by Wild at Heart Legal Defense Association at 1:11 PM No comments: 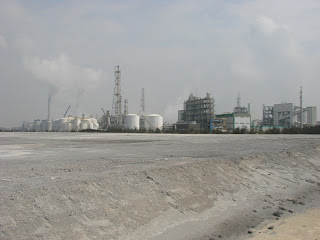 Formosa Plastics at Mailiao in Yunlin County. In the foreground is recently reclaimed land in known pink dolphin habitat.


Has petrochemical giant Formosa Plastics Group (FPG) embarked on a campaign against some of the very principles that define democracy and basic human rights? Whether or not FPG ascribes to these hallowed values of common humanity isn't known. What is known, however, is that FPG has filed a lawsuit against Professor Tsuang Ben-jei (莊秉潔) of National Chung Hsing University’s (NCHU) department of environmental engineering because they claim that in a report that he said emissions from FPG's sixth naphtha cracker plant in Yunlin County’s Mailiao Township (麥寮) resulted in a higher cancer occurrence rate amongst nearby residents which has injured FPG's reputation.


Lets be honest! What reputation does FPG have? Go ask the good citizens of Taiwan what FPG's reputation is and you'll undoubtedly hear the words "pollution," "fires," and "cancer rates" in the majority of answers; if not all. Lets call a spade a spade. How many fires have they had down at FPG in Mailiao over the past two and a half years which have emitted huge uncontrolled toxic clouds of smoke into the surrounding area? Folks have last count. The latest one was on 17 April, wasn't it? It would seem there's always some drama going on at FPG. Lets face it! The folks at the top of FPG weren't the winners of the infamous Black Planet Award in 2009 for nothing. According to ethecon, the organisation which presents both the Blue Planet and infamous Black Planet Awards, "the Black Planet Award condemns individuals (people) who have contributed to the destruction and downfall of our Blue Planet in an outrageous way." Thus, many folks must be scratching their heads this morning trying to figure out how last year during a meeting of the Environmental Protection Administration’s (EPA) environmental impact assessment committee in which Professor Tsuang Ben-jei reported that hazardous heavy metals and carcinogenic substances contained in the exhaust gas emitted by the company’s sixth naphtha cracker plant in Yunlin County’s Mailiao Township in a higher cancer occurrence rate for nearby residents has so harmed FPG's reputation. Come on? Hasn't the the No.17 Highway which passes FPG in Mailiao been nicknamed the "Cancer Corridor" for years? Didn't FTV do a program on the high rate of cancer around the Mailiao FPG plant in December 2009? Compared to national TV, how many folks watch the proceedings of EPA meeting? Like it or not, isn't FPG's reputation linked to high levels and pollution whether they like it or not. That is the perception folks in Taiwan and a great many other places have of FPG.


So if what Professor Tsuang Ben-jei is saying is nothing new why has FPG filed a lawsuit against him claiming NT$40 million for damages to its reputation? Could it be that FPG wishes to intimidate? No, surely not! Can you think of another reason? Oh, I'm sure those clever FPG lawyers can think of many. But there are a great many very clever people that aren't buying FPG's reason. They see it as an attack on academic freedom and the right to free speech. FPG using fear to silence criticism. Using the old "kill one and scare a thousand" tactic. A large group of very prominent academics yesterday rallied behind Tsuang pledging their support. Some has even said FPG can sue them, too.


When a big rich corporation starts attacking basic freedoms it tends to leave a bad taste in the mouths of the average good citizen. Early last year those good citizens made such a fuss about the Kuokuang Petrochemical Project in Erlin just across the Jhoushui River from Mailiao that Taiwan President Ma Ying-jeou was forced to step in and cancel the project. Never had the good citizens of Taiwan got quite so worked up over the petrochemical industry as over Kuokuang. And probably a lot of that anger wasn't directly against Kuokuang but rather against the petrochemical industry as a whole. FPG's string of fires likely helped drive the outrage in that one. FPG should note that. Formosa should also not forget the McLibel case. Even with money and lawyers things don't always go your way.