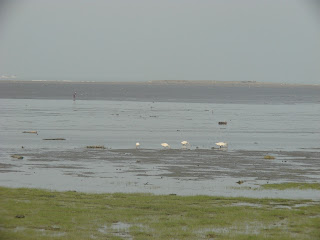 The Central Region Water Resources Office of the Water Resources Agency will be holding three Public Explanation Meetings on the 20th and 21st December (see below) in the Changhua area for the feasibility/planning of the proposed Dadu Weir which would reduce the flow of freshwater into the Dadu (Tatu) estuary. The "Matsu's Fish Conservation Union" will be holding a protest to coincide with the Public Explanation Meetings to raise awareness of the negative impact that the Dadu Weir would have on the unique and extremely vulnerable Taiwan humpback dolphins by reducing the flow of freshwater into the Dadu estuary and how this project will supply water to further develop Taiwan's heavy industry in a country where the per capita CO2 emissions are the highest in Asia and no meaningful plan seems to exist to try and reduce these emission levels.

1. Premise for the Meeting

The Wu River catchment has plentiful water resources and is the main source of water for the Central Region [of Taiwan]. However, because the downstream reaches are polluted by municipal waste the water is of poor quality and the rate of water resource use is low.

The Water Resources Agency of the Ministry of Economic Affairs once planned to build Guosing and Jianmin Reservoirs in the upstream reaches of the Wu River, neither of which went ahead because of many factors. After considering the critical nature of the water resources situation in the Changhua/Yunlin area and the needs of future industrial development, the Central Region Water Resources Office of the Water Resources Agency took precautions and devised the “Dadu Weir Feasibility Plan” [大度攔河堰可行性規劃] in order to use the Wu River resources effectively, suggesting that the priority be to develop Dadu Weir to provide 800 000 tons of water a day industrial use, 300 000 tons per day of which would be supplied to Changbin Industrial Park, with the remaining 500 000 tons per day and Jiji Weir on the Jhuoshuei River to be used together to supply industrial water to Yunlin Offshore Industrial Park.

The estimated cost for the “Dadu Feasibility Plan” project is about 26.8 billion New Taiwanese Dollars. It is planned that in 2009 and 2010 the project will be designed and land acquired, and estimated that in 2011 work will start, and that in 2014 it will be finished, providing sufficient water for industrial use. In addition to promoting industrial development, this can also reduce groundwater extraction, to alleviate the problem of continued ground subsidence.


2. Basis and Purpose for the Meeting

According to Article 10 Item 1 of the EPA’s Standards for Environmental Impact Assessment of Development Activities [開發行為環境影響評估作業準則], before a developer makes and delivers its Environmental Statement to the EPA for review, it must hold at meeting to allow the public to participate and express their opinions.