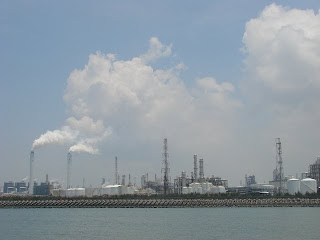 The smokey FPG plant at Mailiao, Yunlin County on the Taiwan west coast


Last Wednesday, the German-based Foundation Ethics and Economics (Ethcon) awarded the Formosa Plastics Group (FPG) the Black Planet Award. An international award for "people who have committed themselves to the destruction and downfall of our Blue Planet in an outstanding way."

Current and future FPG expansion in western Taiwan is resulting in the loss of valuable pink dolphin habitat. Additionally, emissions and discharge from FPG and support industries and services results in high levels of pollution which impact negatively on all forms of life in the area, human and non-human alike.

In the run up to the Black Planet Award environmental groups have accused Taipei bus operators of tampering with their advertisements about the award. It would appear that the bus operators had removed the character for the word "shame" (®¢)from the bus ads apparently under pressure from FPG to do so.

We approached a lawyer with the Wild at Heart Legal Defense Association for comment and the lawyer explained that "the bus ad regs have no legal basis and likely constitute a violation of the constitutional right of free speech. In practice the ad agents through which this was placed say they never are requested to file an application except in extreme situations involving putative pornography or the like. The regs contain no penalties so this is really a throw back to martial law where they have a bunch of regs in waiting, never enforced until they select someone to go after -- in this case apparently under pressure."

For more see Activists target FPG over award in the Taipei Times.

See the Ethcon website for more information and video clips.

Wow, can anyone get a bus driver to admit to this pressure? You would almost think that not everyone involved would be Ma/TPC supporters.

A couple of other interesting links: