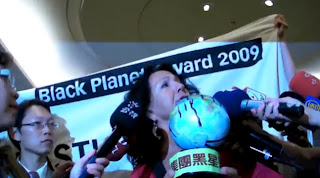 
There were cameras everywhere. Reporters, police, security officers, activists all jostled and pushed. TV crews were falling over each other. There were microphones in people's faces. The popping of flashes created an almost strobe-light-effect at times. Even before the Formosa Plastics Corporation Annual Shareholders Meeting was out, news of the storming of the meeting by green activists was being broadcast to the nation on the major news networks. But mysteriously, Taiwan's three major English newspapers don't even give it a mention this morning. Actually, even amongst the the Hanji Chinese language papers only United Daily News seems to make mention of yesterday's events. (Watch a Formosa TV news report in Chinese with some English) 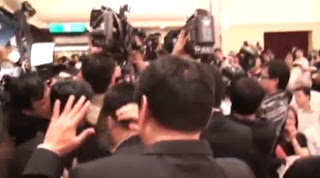 Just last week, images of Diane confronting BP CEO Tony Hayward during the Gulf Oil Spill Hearing at the US House Committee on Energy and Commerce were broadcast across the globe by international networks from CBS to CNN. 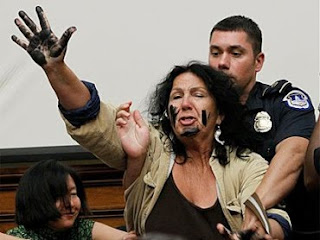 Wilson yelling "you need to be charged with a crime" at BP CEO Tony Hayward during the Gulf Oil Spill Hearing at the US House Committee on Energy and Commerce - photo courtesy of CODEPINK.


Just the week before, Diane had made international news as she dumped fake oil over herself on Capitol Hill. On Saturday June 19 she was again in the news protesting outside a BP gas station in Washington. CNN announced "BP protester arrested Wednesday back at it on Saturday."

On Tuesday Diane was in Chiayi in southern Taiwan speaking on Formosa Plastics at an event alongside local environmental groups. On Wednesday we believe she was addressing members of the Taiwan EPA. On Thursday she was speaking out against the planned Kuo-kuang Petrochemical Plant in Changhua County in western Taiwan that threatens the critically endangered Taiwan pink dolphins and the Dacheng wetlands (The Dacheng wetlands [also spelled Tacheng] has been listed as an IBA or Important Bird Area by BirdLife International and the IUCN). Yesterday afternoon she stormed the FPG shareholders meeting in front of a legion of reporters to try present the Black Planet Award and today Taiwan's papers have nothing to report. Why? What's going on? 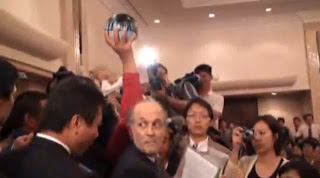 The red sleeved arm of Diane Wilson clutching the Black Planet Award can be seen amidst the struggling activists, reporters and security officials as she tries to present the infamous award to the Wang family and the management of Formosa Plastics.

The ad read "Formosa Plastics Group wins ethecon Black Planet Award" together with the Hanji Chinese character for "SHAME." The campaign was to run on Taipei buses from 18 May to 17 June. Some of the ads went up a day early. Then, the Hanji Chinese character for “shame” was removed by someone on the first day and all the ads came down on the 18th after Formosa Plastics threatened to sue the bus company and the advertising agent through whom the design and placement of the ads had been booked. A fine example of a corporate giant squashing the freedom of speech and expression. (See FPG bus ad campaign for more) 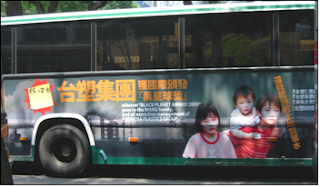 The Hanji Chinese character for "shame" has been covered on this bus ad. The advertisements were to grace Taipei buses from 18 May to 17 June. The ads were pulled when Formosa Plastics threatened to sue the bus operators.

In a news conference outside the shareholders meeting Wilson told reporters that she and other green stakeholders "hope to confront" Formosa Plastics over "their social and environmental destruction of Taiwan and the United States and across the globe. And we also hope to influence the shareholders in this meeting." After the press conference Diane and Co did just that and stormed into the meeting. Shortly thereafter they sat down on the floor and were then evicted by police and security.

Diane Wilson being carried out of the Formosa Plastics Corporation Annual Shareholders Meeting by police and security officers.


Now after all yesterday's action why is there no mention of this in today's papers? The reporters were certainly there and it was interesting enough for news channels to broadcast just minutes after the event. One can't help wondering, like in the pulling of the bus ads, did Formosa have a hand in keeping the papers mum?


Watch:
Footage of Diane Wilson being evicted from Formosa Plastics Corporation Annual Shareholders Meeting. The news conference outside the meeting and activists entering the meeting is also shown.

Click to view the open letter to the Formosa Plastics Group.

*The German-based foundation, ethecon, presents the renowned Blue Planet Award each year for outstanding commitment to the conservation and the preservation of our Blue Planet.

**Each year ethecon also presents a more sinister award, the infamous Black Planet Award to those who have committed themselves to the destruction and downfall of our Blue Planet in an outstanding way. The winner of last year's award went to Formosa Plastics.

***Before yesterday's Formosa Plastics Annual Shareholders Meeting green shareholders stated they would be pointing out the groundwater contamination levels around FPG’s PVC factory in Kaohsiung’s astounding feat of achieving more than three hundred thousand times the legal standard, the soaring cancer rates around FPG’s Sixth Naphtha Cracker offshore facility in Yunlin County, central Taiwan, and how FPG is going to deal with competition from the Kuokuang Petrochemical Park planned for neighboring Changhua County, as well as environmental and safety concerns over its plant in Point Comfort Texas.

Yet another FPG related fire
Posted by Wild at Heart Legal Defense Association at 10:26 AM