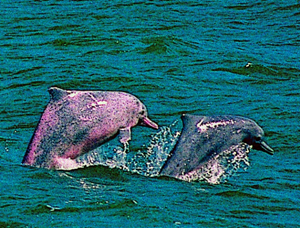 In June 2002 an exploratory survey team made up of John Y. Wang and Shih-Chu Yang of FormosaCetus Research and Conservation Group, and Samuel K. Hung of Hong Kong Cetacean Research Project conducted the first exploratory cetacean surveys of the coastal waters of central western Taiwan (Miaoli, Taichung, and Changhua counties) between 23 and 26 June 2002.

Prior to the 2002 surveys there had only been sporadic records of humpback dolphin in the waters around Taiwan and these records were thought to be stray animals. The only other population of humpback dolphins in Taiwanese controlled territory is around Kinmen Island a few kilometers off the coast of China's Fujian Province near the Chinese port city of Xiamen. The Humpback dolphins around Kinmen form part of the Xiamen population and differ from the unique Taiwan pink dolphins of Taiwan's central-west coast.

Humpbacked dolphins in East Asia are often called Chinese white dolphins or pink dolphins. In Taiwan the unique local humpback dolphin is commonly known as Matsu’s Fish. The Taiwan Strait is influenced by the north-easterly wind, and for three quarters of the year, the turbulent sea off the west coast is covered in whitecaps, making observation difficult. After about the middle of the third month of the lunar calendar, the sea becomes calmer, and the dolphins become easier to distinguish from the waves. The birthday of the sea goddess Matsu falls around this time, on the 23rd of the third month of the lunar calendar. Therefore, it is said that these dolphins appear in the area to wish Matsu a happy birthday. [It should be noted that these dolphins are resident. It is just very difficult to spot white dolphins in wintry white water.]

Indo-Pacific humpback dolphins appear mostly in tropical to warm-temperate areas of the Indian and western Pacific oceans, and are often seen along the south-east coast of China in East Asia.

When born, the dolphin is grey, but in its youth the colour fades and it becomes patterned with blue-grey spots, and upon reaching adulthood, its whole body becomes white or pink. According to the latest research, the Taiwanese population differs from those in the coastal waters of Hong Kong and China in the development and patterns of spotting. The Taiwanese population has unique colouration patterns and may well be a unique subspecies endemic to Taiwanese waters. Scientists are currently continuing the research on their ecology, such as their body colour, genetics, population size and distribution.

The Indo-Pacific humpback dolphin Sousa chinensis is primarily a nearshore, shallow water inhabitant that tends to be associated with the mouths of large rivers. It is found throughout most of the Indian Ocean and the Indo-Pacific region from South Africa to Australia and north to the East China Sea (Jefferson, 2000; Jefferson & Karczmarski, 2001).

In western Taiwan waters (Eastern Taiwan Strait)the species is found in the shallow coastal waters between Miaoli and Tainan Counties. The dolphins’ most important habitat is the coastal waters between Miaoli and Chiayi counties and within five kilometers from shore, which happens to overlap with the locations of major past and current development projects. 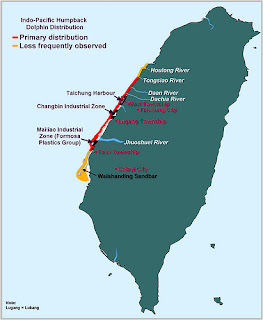 The dolphins favor the shallow inshore waters of Western Taiwan. They frequent estuarine areas. The dolphins are normally found in waters between 1.5 to 15m in depth and generally well within 3km of the shore.

The Indo-Pacific humpback dolphin is classified under Taiwan’s Wildlife Conservation Act as receiving the highest level of legal protection. In reality, despite its protected status, little, if any, has been done to meaningfully protect this unique dolphin population.

Internationally, the Indo-Pacific humpback dolphin is listed as Near Threatened (NT) on the IUCN Red List. However, the Cetacean Specialist Group of the IUCN is in discussions to list this unique Taiwanese dolphin population as Critically Endangered (CR) on the IUCN Red List. It is generally recognized in numerous international cetacean conservation action plans that, in the rapidly developing Asian region, Indo-Pacific humpback dolphin populations are facing major challenges to their continued survival. Conservation action cannot be delayed, and the task of removing human threats must be given the highest priority.

Five major threats have been identified:

- by-catch in fishing gear;
- reclamation of estuarine and coastal regions for industrial purposes;
- diversion and extraction of freshwater from major river systems of western Taiwan;
- release of industrial, agricultural and municipal effluent into rivers and coastal waters;
- noise and disturbance associated with construction, shipping and military activities.

i have a big heart for these majestic creatures! i am an american living in hsinchu, taiwan. i am just north of miaoli county. i just watched the documentary "the cove" and i have been researching dolphins ever since. i would be so excted to see these dolphins in the wild!

thank you so much for this information.