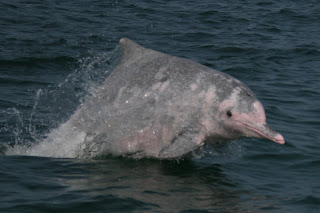 Press release from the Second International Workshop on the Conservation and Research Needs of the Indo-Pacific Humpback Dolphins, Sousa chinensis, in the waters of western Taiwan: 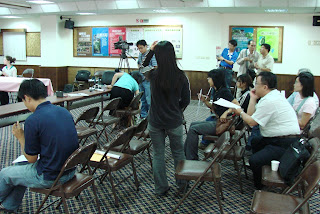 Taiwan’s Indo-Pacific humpback dolphins [aka Taiwan pink dolphins] face imminent extinction if measures are not taken to protect them and their habitat from a number of threats, a group of international experts warned this week in Changhua City. The recent demise of the Baiji in China’s Yangtze River gives a particular sense of urgency to concerns about the fate of Taiwan’s humpback dolphins. The humpback dolphin is a fish-eating mammal that lives in shallow estuaries and nearshore waters of western Taiwan. This animal is especially vulnerable because it relies on habitat at the interface of land and sea. The expert group identified five major threats: reduced river flow into estuaries, habitat loss, entanglement in fishing gear, industrial and municipal pollutant discharges, and underwater noise. 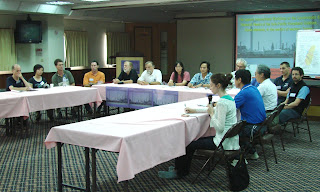 
The humpback dolphins were the focus of an international workshop held in Changhua City on 4-7 September 2007 and sponsored by: Ministry of Education; Forestry Bureau; National Science Council; Ocean Park Conservation Foundation, Hong Kong; Winkler Partners; Humane Society International; Natural Resources Defense Council. This workshop was a follow-up to an earlier meeting on the same topic in Wuchi in February 2004.

The following were among the important new scientific findings presented at the workshop:

• Systematic boat surveys between 2002 and 2004 suggest that the total number of Eastern Taiwan Strait (ETS) humpback dolphins is only about 100 individuals.

• Subtle but consistent differences in colouration pattern indicate that the ETS humpback dolphins are isolated and independent from populations of the same species along the mainland Chinese coast (e.g. Xiamen and the Pearl River Estuary).

• Throughout most of the year (winter distribution has not been studied) the dolphins occur in or near estuaries along the west coast of Taiwan from Tongshiao (Miaoli County) and Waishanding Zhou (Yunlin and Chiayi counties).

• They live very close to shore (mostly within 3 km), mainly in waters less than 25 metres deep. Researchers have established observation posts at several sites where the animals can be observed and studied from shore.

• More than 30% of the dolphins bear serious wounds or scars indicative of harmful encounters with fishing gear, vessels or other hazards in their harsh near-shore environment. 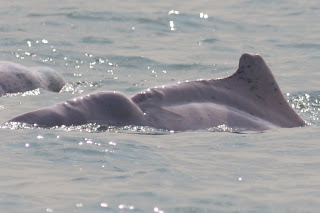 Information provided by local officials and scholars confirmed that the threats identified in 2004 have gotten worse, not better. For example, construction of Jiji Weir and Hushan Dam, already controversial, will further reduce freshwater flow and sediment deposition in the Jhoushuei River estuary, making this important habitat less suitable for dolphins. The fishing industry on Taiwan’s west coast is plagued by problems of its own – over-exploitation of stocks, pollution, destruction of spawning and nursery habitat – and these also have implications for dolphins. No progress has been made since 2004 in assessing, much less in addressing, the threat of incidental mortality in fishing gear (bycatch). The same must be said, unfortunately, about the problem of toxic chemicals and other harmful substances being injected into coastal food webs off western Taiwan. Major industrial development initiatives are going ahead with little, and usually no, recognition of their potential impacts on dolphins and other marine and estuarine organisms.

Although workshop participants acknowledged the severity and urgency of the threats facing ETS humpback dolphins, they concluded that there was still hope of preventing this unique population from going the way of the Baiji. As a first step, they formed a steering committee to establish an international working group of scientific experts whose mandate will be to provide independent advice on ETS humpback dolphin research and conservation. In addition, the workshop recommended that interested individuals and groups move ahead as quickly as possible to establish a multi-stakeholder body to ensure that the advice of the expert working group is both heard and heeded by relevant decision-makers, agencies and industries within Taiwan and internationally.

With consideration of the above, other specific recommendations to the central and local governments from the workshop included the following:

• Carry out public and transparent evaluations of all existing and planned projects and future proposals that may impact the ETS humpback dolphins and their habitat (including upstream watershed areas), which may include:
 Land reclamation and coastal construction
 Sand and other substrate removal
 Artificial reef projects
 Water resource management projects
 Industry and other pollutant point-sources
 Noise-generating activities
 All energy-generation projects

• Mitigate all existing and planned projects and future proposals that may impact the ETS humpback dolphins and their habitat (including upstream watershed areas) using best available methods;

• Prohibit use of gill nets and trammel nets in waters inhabited by ETS humpback dolphins;

• If any marine protected area (MPA) were to be developed for humpback dolphins in Taiwan, it would require substantial resources and an open planning and consultation process and would need to cover their entire effective range to provide meaningful protection (e.g., strict enforcement); 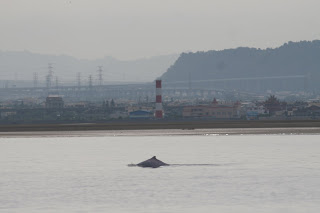 
All laws and regulations regarding disclosures of environmental data and information concerning development projects and other activities that have potentially adverse impacts on the humpback dolphins and their habitat should be interpreted in a manner that will facilitate the fullest possible disclosure and participation by stake-holders. Without such disclosure, attempts to understand and mitigate threats and ultimately ensure the survival of the ETS humpback dolphins will be severely compromised.

The Second International Workshop (2007) on the Taiwan Humpback Dolphins

The First Symposium and Workshop (2004) on Conservation and Research of Indo-Pacific Humpback Dolphins, Sousa chinensis, of the Waters of Taiwan

Summary of Local Media Coverage of the Humpback Dolphin Workshop
Posted by Wild at Heart Legal Defense Association at 11:09 PM