Protest Planned for the Executive Yuan 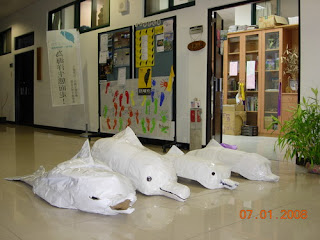 Five paper models of the dolphins will represent each of the five major threats.

Protesters will be asking the EY to commit to addressing the concerns and to appoint a Minister to take responsibility for the issue and act as a window for consultation on the issue.

The Executive Yuan will accept the petition and likely arrange for several officials to meet with representatives of the various groups attending.

We have also heard that the steering committee set up at the Second International Workshop to establish an international working group of scientific experts whose mandate will be to provide independent advice on the research and conservation needs of the Taiwan humpback dolphins will be announcing the establishment of the scientific working group tomorrow. This announcement will be made in the United States and will coincide with the Taiwan protest.
Posted by Wild at Heart Legal Defense Association at 10:59 AM