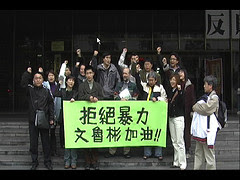 
On Friday 25th January, environmental groups rallied in front of the Taipei District Prosecutors Office to express support for Robin Winkler, Director of Wild at Heart Legal Defense Association, who was physically assaulted by Yunlin County speaker Su Chin-huang at a meeting at the Environmental Protection Administration (EPA) offices in Taipei on 7 November 2007. The meeting concerned the Formosa Plastics Steel Mill in Yunlin County, which is believed would have harmful impacts on the struggling population of Indo-Pacific humpback dolphins in the west coast waters of Taiwan.

Trouble broke out during the fifth subcommittee meeting for the project when the subject of the project’s impacts on the dolphins was raised. Some project proponents made false claims that photographs of the dolphins had been taken abroad, and not in Taiwan. Environmental groups defended the evidence of the dolphins’ presence in Yunlin County. (Scientific reports and photographic records already prove beyond any doubt that the dolphins are to be found in the shallow coastal waters of Yunlin County around the proposed site of this development.)

Su, whose brother had disputed the presence of the dolphins, later followed Robin Winkler out of the meeting room and punched him twice, leaving him heavily bruised. 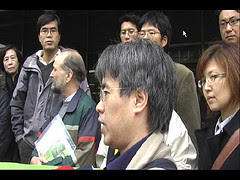 The environmental groups who attended the protest on Friday, which included the Green Formosa Front; Taiwan Environmental Protection Union; Raging Citizens Act Now; Society of Wilderness; Green Party Taiwan; Taiwan Academy of Ecology; and Tsaoshan Literature, History and Ecology Union, called out their condemnation of the Formosa Plastics Group (FPG) and Su’s violent act, which is believed to reflect the notoriously high level of collusion between the government, the mafia and powerful commercial interests in Yunlin County and the concern of those interest groups that the dolphins might swim in the way of lucrative construction contracts.

Dr. Liao Pen-chuan of Taiwan Academy of Ecology and Assistant Professor at National Taipei University explained that FPG’s influence extends to local government and mafia, whom it used at the meeting last year to threaten and intimidate environmental groups.

After the incident in November, environmental groups also seriously criticized the EPA for its failure to do anything when its in-house security found out almost immediately that Mr Winkler had been attacked, and effectively siding with FPG, which is known for its sky-high CO2 emissions and other forms of pollution in Taiwan and abroad.

An inquiry is being held into the incident, with the second hearing having taken place on Friday shortly after the protest.