ETSSTAWG Press Release: Taiwan’s unique population of Indo-Pacific humpback dolphins is on the brink of extinction 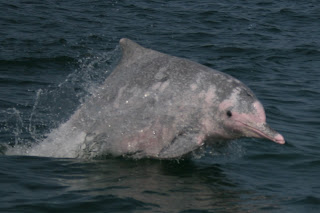 
Vancouver (12 August 2008) – Today, the IUCN (International Union for Conservation of Nature) released the 2008 list of threatened species of cetaceans (whales, dolphins and porpoises). In this updated list, the western Taiwan (= eastern Taiwan Strait) population of Indo-Pacific humpback dolphins (Sousa chinensis, also known locally as “Matsu’s Fish” or “Chinese white dolphin”) was listed as “Critically Endangered” (CR) - the most serious category of threat to a species or population.

The chair of the IUCN’s Cetacean Red List Authority, Dr. William Perrin, says, “Taiwan’s humpback dolphins have been listed as Critically Endangered because this distinct, isolated population is already dangerously small (less than 100), faces multiple serious threats, and will likely be driven to extinction if effective conservation measures are not taken quickly.”

Studies have shown that the dolphins’main distribution is the narrow stretch of coastal waters of central western Taiwan from Miaoli County to Yunlin County, but that they may also range as far south as Chiayi and Tainan Counties.

The main threats to the population have been identified as:
- reduced river flow into estuaries;
- habitat loss (e.g. through land reclamation);
- entanglement in fishing gear;
- industrial, agricultural and municipal pollutant discharges; and
- underwater noise.

A Conservation Action Plan was drafted by Taiwanese and international scientists andstakeholders in September 2007 in hopes of improving habitat protection measures in Taiwan.

On 8 January 2008, the ETSSTAWG was formed, consisting of 17 national and international researchers, including many of the world’s leading cetacean scientists, to provide expert scientific advice to parties interested in conserving the endangered population for future generations of Taiwanese. In a letter to President Ma Ying-jeou on 1st August 2008, the ETSSTAWG invited Taiwan’s new government to take measures to protect the population from anthropogenic threats.

Today’s announcement, by the world’s most authoritative body on the conservation status of species, reinforces concern expressed by the ETSSTAWG about the prospects for survival of Taiwan’s Indo-Pacific humpback dolphin population. Said Dr. Peter S. Ross, Chair of the ETSSTAWG, “Time is running out for the Indo-Pacific humpback dolphin in Taiwan. We hope that recent advances in our understanding of the habitat needs of this charismatic creature will identify a path forward that allows it to recover and thrive.”