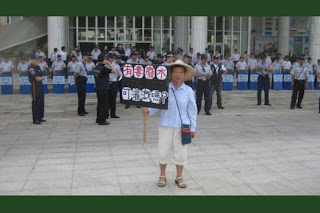 A local resident holding up a protest sign outside the Environmental Protection Administration during a hearing on the Erlin Science Park last month.


Some interesting comment on the CTSP Erlin Science Park project from the Taiwanwatch blog. An English translation of their article appears below. A shortened version of this article appeared in Apple Daily.

Despite repeated criticism, on 13 October the contentious environmental impact report of the fourth stage expansion of the Central Taiwan Science Park was finally granted provisional approval. The Environmental Protection Administration (EPA) maintains that the environmental impact assessment examination was conducted professionally, and was not granted provisional approval due to pressure from the developer, the Central Taiwan Science Park Bureau of the National Science Council. Nevertheless, the 13 October extension meeting of the fifth preliminary examination and the 31 October Environmental Impact Assessment Committee meeting were conducted behind layers of security blocking out locals that would be harmed by the development and opposed environmental organizations, clearly demonstrating that the Environmental Impact Assessment Committee was not free from strong pressure from the administration.

It has long been the case that officials presiding over economic issues and elected politicians use their authority to push through development plans or policies that have not undergone environmental impact assessment and flout national land planning regulations. Without consulting those citizens whose rights and interests will be affected, they make promises to potential beneficiary businesses and stakeholders, and then resort to various forms of political manipulation to force the EPA and Environmental Impact Assessment Committee to toe the line. The fourth stage expansion of the Central Taiwan Science Park is a classic example. Such a myopic political agenda and an economic development policy that flouts environmental evaluation not only threatens the independence of the Environmental Impact Assessment Committee, but also tramples on the environment and the rights and interests of the people and threatens national development.

Still more lamentable, even in the wake of Mother Nature’s warnings, the proponents of these shortsighted projects have not paused for reflection. After the “flooding of 88” [flooding that came with Typhoon Morakot beginning on 8 August 2009], not only have climate change-induced disasters left Taiwanese in a state of heightened anxiety, but they continue to ravage people all over the world. In this state of affairs, the newly installed Minister of Economics, Shi Yansiang, remarked at a business affairs meeting earlier this month, “In the future, every development project will be prioritized according to those ‘issues of most importance’” (meaning priority will be given to the fourth stage expansion of the Central Taiwan Science Park, Kuokuang Petrochemical Company, and the fifth stage expansion of the Sixth Naphtha Cracker Plant), with the primary goal of increasing opportunities for employment. His address entirely ignored that the economic and environmental impacts of these development projects are also “issues of most importance.” To continue ignoring these “issues of most importance” will create obstacles to dealing with climate change and result in the loss of an ideal opportunity to begin developing in a more sustainable fashion.

The fourth stage expansion of the Central Taiwan Science Park will primarily increase production capacity of TFT-LCDs and semiconductors. These two industries of “most importance” not only nearly collapsed under the assault of the financial tsunami, but will continue to face increasingly destructive international competition. The expansion will definitely not create more employment opportunities and a more stable socioeconomic situation. This is not a Blue Ocean Strategy. Furthermore, the environment and health risks that will come with it—various poorly understood toxic pollutants present in gaseous emissions and wastewater effluents, consumption of water resources, greenhouse gas emissions—will be difficult to bear, especially considering the site of the expansion plan in Changhua County. This water deficient region is already suffering surface subsidence due to over-extraction of groundwater. The project will not only take hundreds of hectares of farmland that help prevent floods, retain groundwater, and sequester carbon dioxide and turn them into cement lots with impermeable surfaces; but will also pump 4800 tons of groundwater daily (in the short-term) and transfer 66,500 tons of water daily from agricultural water resources drawn from the Jiji diversion weir (in the medium-term). In the long term it is planned to use 160,000 tons daily from the Dadu diversion weir, which is still only in the planning stages. If this project doesn’t exacerbate surface subsidence and render coastal areas more vulnerable to climate change-induced rising sea levels and increasingly frequent and violent extreme weather events, then it will force more agricultural areas to lay fallow, reducing national self-sufficiency and threatening food security.

Agriculture, an essential and foundational industry totally dependent on the weather, will be most affected by climate change. The government is not considering strengthening our agricultural industry’s ability to cope with climate change through conservation of water resources and reducing consumption in order to guarantee sufficient water for agriculture and daily use; but on the contrary repeatedly rolls out development plans that will exacerbate climate change and weaken agriculture. Increasingly precious water resources are being proffered to a minority of manufacturing businesses to squander in an attempt to maintain a tenuous grip on global luxury product markets. Could this be anything but suicide?

Climate change is already an urgent threat, and we have little time to effectively address it. If humanity is to avert imminent dangerous climate change, immense transformations must be carried out including dramatic shifts in industrial development and energy infrastructure. Before 2050 greenhouse gas emissions must be approaching zero, and before the end of the century we must achieve negative greenhouse gas emissions—the emissions that we continue to pump into the atmosphere today must somehow be physically removed. This arduous mission also offers enormous opportunities for economic development, however, and is a turning point for more environmental friendly development. This is an opportunity to create a renewable energy-based, highly efficient economy, and throw off our reliance on imported fuels such as oil and coal. This not only will increase our energy autonomy, but will greatly reduce the emission of numerous pollutants. Only a system that can meet our basic needs with local resources and relies on sustainable, locally produced energy warrants the label “Taiwan’s Economic Development Blue Ocean Strategy.”

Unfortunately, following the financial tsunami our government continues to emphasize investment of increasingly scarce resources in large-scale, greenhouse gas-intensive development projects, not only swallowing up vast resources necessary for the radical shift of our economic system, but intensifying the difficulty of averting dangerous climate change. The direct and indirect emissions of the fourth stage expansion of the Central Taiwan Science Park will amount to 10,950,000 tons of CO2 equivalent annually, equivalent to about 4% of our current total national emissions. Added to the emissions of Kuokuang Petrochemical, the fifth stage expansion the Sixth Naphtha Cracker Plant, and the Dragon Steel project which has already passed its environmental evaluation, Taiwan will increase total emissions by 16%, more than the current emissions of the transportation, residential, or commercial sectors. In other words, every Taiwanese could stop driving or stop using electricity at home and the reductions would still not equal the emissions added by these heavy development projects! Could the government actually not understand that the more we increase our emissions today, the greater will be the burden of decreasing them tomorrow, the greater will be the dangers posed by climate change, and the less capable we will be to deal with them. If we don’t change our direction of development today, tomorrow we may not have the chance or the resources.

More protests at the EPA against the CTSP Erlin Science Park