Yet another FPG related fire 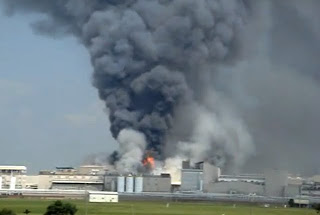 
Another Formosa Plastics fire ! Yes, unbelievably there has been another one. On Sunday FPG affiliate, Nan Ya Plastics Corp, had a fire break out at their Chiayi Second Plant in Taibao City in Chiayi County. The blaze started at about 8:30am on Sunday and raged for 17 hours before firefighters were able to extinguish the blaze. The plant produced a waterproof synthetic paper known as white pearl, or PEPA. No casualties have been reported.

Two fires at the group’s petrochemical complex in Mailiao Township in neighbouring Yunlin County in July caused national outrage and provoked demonstrations. It is clear that in the wake of the July fires that FPG has just carried on with their usual profit-at-all-cost manner of conducting business. Sunday's fire serves to highlight the groups ongoing horrendous environmental track record. FPG were the 2009 winners of the infamous Black Planet Award for their shocking disregard for the environment.

Yesterday, FPG chairman William Wong apologized for the fire. Under the circumstances such apologies can't be seen as anything but a sarcastic joke. The toxic fallout from such fires cause tremendous environmental damage. The Environmental Protection Administration said it had collected samples of black-colored rain water believed to have been the result of the fire. With the EPA's record of cosing up to the petrochemical industry one can't help but question if the EPA could be considered "neutral" enough to actually be entrusted with the analysis of such samples? Any reports issued by the EPA regarding this have to be seen as potentially suspect. A totally independent enquiry needs to be made into this and the other two recent Formosa fires. Clearly, whatever pressure the EPA and cabinet gave FPG after the two Mailiao fires in July it hasn't resulted in any meaningful changes in the safety standards at the group's plants.

Photos of the Nan Ya Plastics Corp fire

Opposition pressures Government in wake of the second Formosa fire

Candidates - No fallout from Formosa fire in Sinbei elections

Government defies the courts with the President's blessing

Isn’t It Time the Legal Community Spoke Up?

Science park development at Houli gets the nod